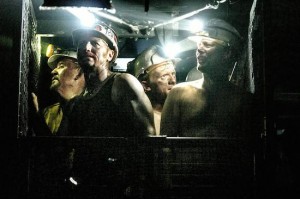 Unfortunately, I was unable to see this live in the theatre but couldn’t believe my luck when the drama was live-streamed. Fortunately, Hampstead Theatre believes in accessible theatre to all, wherever they may be.

The last play I saw about a group of miners was ‘The Pitman Painters’: miners in Ashington, Northumberland, who became respected painters after seeking art tuition in the 1930s. ‘Wonderland’ is no cultural, romanticised venture, though; here Beth Steel focuses on a Nottinghamshire coalmine to mark the 30th anniversary of the miners’ strike. It is the mid- 80s when Britain still had a coal industry. The National Union of Mineworkers strike against a programme of colliery closures – which their leader, Arthur Scargill, argued was politically motivated and would involve far more shut-downs than the official list state. Seizing on the NUM’s refusal to hold a national ballot to endorse local strikes that were escalating through Britain’s coalfields, the majority of traditionally moderate Nottingham miners continued to work, overturned the local NUM executive and formed a breakaway union, the Union of Democratic Mineworkers. The split made the Nottinghamshire coalfield the focal point of an often-violent dispute amongst co-workers, communities and friends. The miner was also at the centre of a never-ending class war.
The narrative follows two young recruits who are about to learn what it is to be a miner, to be accepted into the close camaraderie and initiated into volatile workplace conditions. At times, Steel lapses into caricature and the bawdy humour becomes wearing but what is achieved is a convincing compassionate drama of the miners’ plight during the strike.

Undoubtedly, gritty performances from Ben-Ryan Davies and David Moorst , as Jimmy and Malcom are to be applauded. It is a subterranean male province and women, though mentioned are in absentia. Overall, Steel’s dialogue allows the audience to experience the individual impact of that the strike has on each person.

Sometimes elaborate sets detract from the drama. Here, Ashley Martin-Davis’s conversion of the auditorium into a mine is brilliantly conceived. The hydraulic metal pit cages raises and lowers miners to and from work and, together with the metal overhead walkways, creates a sensory trail of heat, noise and darkness of a dangerous underbelly of a pit environment. The attention to detail paints a credible world of men who pride themselves in their work – all neatly encapsulated in the character of the Colonel, played with dedication by Paul Brennan. Powerful bonds between the men are forged. Miners who were invited to the production found the depicted scenario very convincing.
As the play progresses, the impoverishment and demoralisation of the miners is palpable. Without are the looming voices of Arthur Scargill and Margaret Thatcher somewhere in the background but that does not detract from the miners’ sense of entitlement tension between the traditions that were sustaining the families of pit villages, and an obsessive desire for progress by politicians and economists.

Scenes alternate from the mines to Peter Walker, Nicholas Ridley and the National Coal Board’s American chairman, Ian MacGregor. I don’t believe in class” snaps the American We witness the inevitable. The play doesn’t brow beat us with left wing values but there is genuine animosity towards the political gameplay of Thatcher’s government, determined to avenge the victories of 1972 and 1974, with plans for a strike over pit closures and Arthur Scargill duly leads the NUM into the trap.

The playwright, Beth Steel is the daughter of a Nottinghamshire coal miner, who still works underground and you can sense her affinity with the focus on miners’ lives.’ Wonderland’ is a remarkable success story from a girl who left her comprehensive at 16 and ran a boutique in Greece. Ultimately, she hopes audiences will leave with ‘a much more complex view of the strike’, and we do. Congratulations to Edward hall for having the confidence and faith to allow Steel to explore the miners’ struggle against the politicians in the war against pit closures; against politicians who are more concerned with a market than running the country.