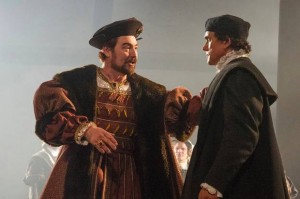 ‘Wolf Hall’ and ‘Bring Up the Bodies’ at the Aldwych Theatre

‘You cannot make my thoughts a crime’
‘But I can, you see’

Thanks to the mnemonic we learned in history lessons: ‘divorced, beheaded, died, divorced, beheaded, survived’, we are familiar with this summary of Henry VIII’s serial marriages. The monarchy is historically all about male succession, and Henry produced no viable male heir. (Elizabeth, who succeeded him, was the daughter of Anne Boleyn.) This, then, was the springboard of all internal political action as well as of international affairs. Marriage was business. And marriage was the prerogative of the church, whose blessing was required to validate it.

Mike Poulton’s compression of the royal power politics over 1,000 pages of Hilary Mantel’s fictionalised biography of Thomas Cromwell in ‘Wolf Hall and ‘Bring Up the Bodies’ into two plays is a masterful achievement. Even pared down, the effect sharpens wit and focuses our perspective on the two main characters: Thomas Cromwell and Henry VIII.

There is little sense of the historical textural loss of Mantel’s well researched narrative of Tudor England in the 16th century. Christopher Oram’s stark fixed set is a vast concrete-and-steel prison-like box with a huge cross of light dominating the back wall. The contrasting richness of the costumes are a reminder of how Mantel presents detail;how she loves embroidery, decorative baubles, textiles. The result on stage is like watching a Rembrandt canvas come alive. Cleverly, Paule Constable uses light to seemingly brighten Henry’s world every time he appears.

More importantly, the focus becomes the dense rich dialogue which informs the audience and drives the narrative on.
Ben Miles is superb as the self-made Thomas Cromwell as he reinvents himself from a blacksmith’s son turn into a Machiavellian politician. Despite Cromwell’s drive as the king’s chief fixer, spin doctor, his humanity, family loss and profound sense of loyalty are ever present, particularly in defence of jibes against his mentor, derided by the barons as ‘the butcher-boy Wolsey’.

It is a relief that the audience doesn’t have to relive my narrative challenge when embarking on the first Mantel novel where events are presented from Cromwell’s point of view: he is always ‘he’ – which is why it takes us some time to realise who he is in the first chapter – and if this presents any ambiguity, he becomes ‘he, Cromwell’. All said, Poulton’s crafting is crisp. Thomas Cromwell, the family man is likeable. Thomas Cromwell the public servant works very hard to appear invulnerable.

Surprisingly, Nathaniel Parker’s Henry VIII (only seen previously as the grumpy, mannered, Detective Linley in a TV drama series) is impressively drawn with a Shakespearean tragic flaw. He adeptly conveys the vanity of a king whose volatile mood swings between dangerously insecure and regal. Lucy Briers is excellent as Henry’s slighted but resolute and resilient first wife, Catherine of Aragon.

Director, Jeremy Herrin makes the production feel racy, pacy and accessible. He underlines Mantel’s contemporary approach to Cromwell by appreciating his toughness, his keen political instincts, his financial brilliance and his intimate knowledge of the workings of power.

The eponymous ‘Wolf Hall’, where Jane Seymour lives, ends with plans for a royal progress, almost a play on words for what will come next.

Of the two plays, ‘Bring Up the Bodies is the darker. The political focus has narrowed down from the repercussions of Henry’s split from Rome to the intrigues and manoeuvrings of the English court. In Wolf Hall the legal debate about Henry’s divorce has descended to talk of torn skin and spots of blood on the bed-linen on the wedding night. With Anne Boleyn it’s the old question that always haunts Henry, the one he speaks out loud: is it ordained by God that he will never have a legitimate male heir? We are given a clever contemporary spin of the persecution, trial and death of Anne.

Ben Miles re-calibrates Cromwell’s character to resemble the unpleasantness depicted by Hans Holbein the Younger’s portrait. The court hypocrisy of Henry’s court is exposed: noblemen’s daughters are offered to the King in return of favours yet we are mindful that the queen can be executed on mere suspicion of adultery. More than that, we are reminded of the danger of living in a society where power goes unchecked.

Cromwell exploits the King’s volatile relationship with Anne Boleyn and tries to give the King what he wants: a fresh start which would allow him to have a son. His cruellest trick is to rewrite another’s past: it is how Anne Boleyn herself is brought to the block – a carefully crafted entrapment. Lydia Leonard’s Anne Boleyn makes a transition from a scheming minx to an almost sympathetic victim of the Tudor snake pit.

History repeats itself: women, show trials, forced confessions, torture and beheadings – that still resonate today. As Mantel says, the stories of the past never leave us; they colour and shape what we see around us. The necessity for Anne’s death is realpolitik. We are left with a sense of the mutability of life in this world, when Henry reproaches Cromwell for being censorious. The King’s advisor might soon be dead, but, as though to promise that, it will be worth waiting for the next novel/production. Dual threats of imprisonment and damnation are always real and imminent.

And so I look forward to Mantel’s third book in the trilogy, along with a TV adaptation to be broadcast by the BBC next year. Mark Rylance will play Cromwell, though I’m not too sure of casting Homeland star, Damian Lewis as Henry.