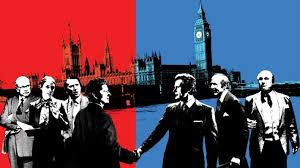 ‘This House’ by James Graham at the Cottesloe

‘A Conservative government always eventually falls because they believe themselves entitled to power, and Labour governments always fall because they don’t.’

Can one make a satirical play centred on the fragile coalition politics of the 1970s?  These were the years of industrial unrest, spiralling inflation, but an absence of spin doctors and 24 hour news. James Graham’s drama emerges as a result of a National Theatre commission soon after the 2010 election delivered a hung Parliament.  At just 30 years old, Graham wasn’t born until three years after the events of the play, yet with thorough research he creates his own version of the political playground tribalism.

Most of the action takes place in the Labour and Conservative Whips’ offices, where much of the wheeling and dealing goes on – the dark arts of politics.  This is a time when the Labour government’s precarious ability to survive a hung parliament and a wafer-thin majority creates most of the play’s dynamics. The Labour Party whips have to fight for every single vote to pass legislation and win over as many as they can, including those MPs from minority parties. Eventually, every MP is required to be present in Parliament for every division to avoid losing a vote of No Confidence. The absurd lengths to which Whips go to ensure that their party members appear on the floor to vote is a fault line of our parliamentary system.

So, Philip Glenister as the formidable Labour Deputy Chief Whip, Walter Harrison, needs a controversial pairing of MPs, to save the Labour majority. For the uninitiated, pairing simply means that if, for example, a Tory MP is known to be unable to appear for a vote on a given day, a Labour member agrees by gentleman’s agreement not to attend the session and therefore sit out the vote.

Charles Edwards, as his Conservative counterpart, Jack Weatherill portrays the honourable face of  old-fashioned, patriarchal Conservatism.  After due consideration, he accepts, offering to be the pair himself – knowing that it will alienate him from his own party. After a very long pause, Harrison declines the offer. Within the game play is the North meets South stereotyping: a rough, kipper tied, Labour Northerner negotiating with the prim, pin-striped Tory Southerner. The chemistry between these two characters is perfect: political combatants, maybe, but honourable enemies nonetheless. Amidst the wrangling, not only does Labour’s John Stonehouse fake his own death, go to prison for fraud but also amidst of a heated inter-party dust-up, Michael Heseltine infamously swings the mace after Labour is deemed to have cheated.

By the end the Callaghan government fell to a vote of no-confidence in 1979.

Even though MPs are not identified by name but by the constituencies they represent, the political characters leave no doubt.  Margaret Thatcher, although rising to Prime Minister in 1979, is only mentioned as Finchley as well as being addressed as the grocer’s daughter. Lauren O’Neil‘s token female presence sketches the rise of the first female Whip with great character.

As  enjoyable as it was to watch the Labour whips balancing the various political groupings from whom they need support (or, at the very least, non-opposition) for their legislative programme, it gets repetitive when executed more than two or three times in quick succession. In addition, being three hours long, the play would have benefited from judicious trimming.

More importantly, Graham juggles humour and pathos brilliantly in reminding us that a political system based on tradition and requiring honour to keep it ticking along is in dire need of change: all summed up in a glorious one liner: This isn’t a parliament, this is fucking purgatory.

Rae Smith’s set design is both intimate and imposing with the physical layout of the House of Commons, which places members of each party opposite one another on long, upholstered rows of green leather seats. Here, the audience, too, is seated and immediately immersed in the quick fire dialogue.

Jeremy Herrin’s direction is excellent. There’s a live band to deliver a couple of highly apposite David Bowie angry 1970s numbers strongly performed by Gunnar Cauthery . Bowie’s ‘Five Years’. The song complements some unlikely physical theatre, with singing and dancing in collective agony lamenting the ‘five years’ left of such a difficult minority government. Gunnar must have been momentary distracted when playing one of his multi roles as David Steel to find the aforementioned staring at him in person in the audience.

Under Jeremy Herrin’s excellent direction of the 16-strong cast of actors in multiple roles, the play is fast with choreographed routines and some unlikely physical theatre in which the army of politicians meticulously march to their jobs, lapels embellished with either the red or blue rosette; singing and dancing in collective agony lamenting the ‘five years’ left of  a difficult minority. Perhaps we could have done without the sea recreated in the middle of an office setting.

The emphasis on compromise and austerity resonates for us now.  ‘To govern is to choose’ was the famous aphorism of French premier Pierre Mendes-France, but the reality is that politics, where fallible, usually well-intentioned human beings, are forced to choose between shades of grey.

Honest satire is popular at the moment demonstrates the general distrust of the political elite and their system. We all utilise a kind of doublethink, believing that we’re exercising our democratic right by voting but knowing deep down that it makes a negligible difference.

What is uncertain is whether the play will have the same impact protracted into a TV series as the celebrated West Wing. Undoubtedly, James Graham’s talent as a writer is extraordinary, and, especially, in one so young.