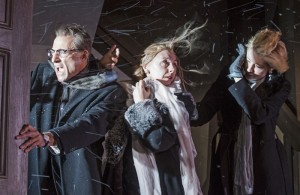 The Red Barn By David Hare

At the National Theatre

“ The Red Bar” is David Hare’s adaptation of one of his favourites, Belgian writer Georges Simenon’s 1968 novel,” La Main.”  It is a study of jealousy, sexual obsession.

The action begins  in a snowstorm in Connecticut, with two couples on their way home from a party. One of the men, Ray gets caught in a blizzard and never makes it back, and the heaviest psychological burden falls on the remaining one: Donald. (Ray’s best friend since Yale)Where is Ray? Is he dead or alive? Has he been killed by accident, murdered or committed suicide?

The opening scene also starts with an optician’s examination.  Ingrid is told her vision is perfect; yet she’s the all-seeing wife.  Mark Strong never seems comfortable in his role as key suspect in his friend’s disappearance. Elizabeth Debicki, as the dead man’s wife, gives a predictable performance: her face initially seems a blank canvas on which other people impose their desires; reminiscent from her role in the TV series, “Night Manager.  She craves affection, but her detachment left me comatose.  She merely floats around being elegant, pale.  When the storm abates, an Agatha Christie-style-sceptical police lieutenant (Oliver Alvin-Wilson) turns up and questions them.

Showing us snapshots of the story, sometimes weeks or months apart, throughout its two hours (sadly, without interval) the look and tone of this staging are controlled with almost military precision.

Bunny Christie’s stage design where screens slide open and shut to reveal scenes with filmic blackouts: the storm is effectively conveyed in widescreen with battering projections, and we rapidly cut between different locations: the house, the party, Mona’s chic Manhattan apartment. Robert Icke often frames the actors or there is a focus tightly on details, perhaps to mirror the programme introduction to the play where Hare quotes Simenon to the effect that reading a novel is like looking through a keyhole at other people’s lives. All  remind us what we  might be  prevented from seeing.

Simenon was prolific writer. He claims to have written 80 pages a day. And then he used to throw up afterwards.  Well this production is lacking energy and plods so much in places, I wish I could have found the nearest bucket.