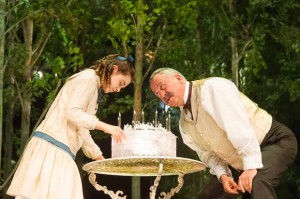 ‘The Nether’ by Jennifer Haley

‘The Nether’ by American playwright, Jennifer Haley is one of the most exciting plays I have seen this year, not only for its uncomfortable dystopic exploration of its subject matter, but also for its visually stunning set design.

Haley’s world is  a future where anyone can live through an avatar and experience anything imaginable. My hesitation in seeing this production came when I learned of the topic to focus the play’s discussion: Haley bravely uses the premise of paedophilia  to polarise and challenge our moral perspective.

Aside, I remember my daughter being once addicted to ‘Myst’, an immersive computer game experience. Although the ostensible objective is the solution of the puzzles, the actual purpose for playing ‘Myst’ is the exploration of a seemingly real world that the creators of the game have made. The next generation of this game is the idea reworked to play ‘Sims’, where the way to achieve happiness is to satisfy your Sims’ needs. In order to do this, it is possible to create, direct and manage the lives of SimCity’s residents.

I recalled the game as the audience learns of the Hideaway, a vitual Darknet of The Nether; a paedophile’s paradise created by, ironically, a Mr Sims (a superb, sugar daddy performance from Stanley Townsend) who provides his guests with the perfect getaway  to explore every part of these darkest fantasies – the abuse and murder of children. Yet, those involved are prisoners of their own desires.

We first meet a young detective, Morris( Amanda Hale). Her opinion is that a crime online is as dangerous as a crime in reality and that there are always consequences, even if the participants allow themselves the notion that this is a safe zone.  It is an interesting take on Orwellian notion of thoughtcrime, of such a thing as a world without consequences. If it is virtual reality, does that abolish the idea of virtue and its opposite? Morris has tracked down Sims, and is interrogating him both with the aim to shut down The Hideaway, but also to expose possible similar activity in reality. Spoiler aside, there is a disquieting creepiness as Morris’s own motives and prejudices grow more compromising in contrast to the morally ambiguous, Sims.

In the Hideaway, Sims’ alter ego is Papa, a gentle-looking older man, who prefers one of his creations, a pre-pubescent girl, Iris. Here is a perfect Victorian upper class world where you hear the wind in the poplars and where the whisky tastes better than in real life. Iris will let you do anything to her as long as you follow the rules and don’t get attached. Disturbing, yet enjoyable is the part of the Iris, shared between 11 year olds, Zoe Brough and Isabella Pappas. I think we saw the former. Whilst Brough’s portrayal of Iris as the naïve yet strangely self-assured pawn, I did feel uncomfortable at times not only by the corrupted idea stemming from an innocent touch or a game in this zone, but by knowing that such a young girl was playing the part. Safe to say, the production takes great care to ensure that we never forget that everything distasteful is nevertheless only happening within the mind, unless one crosses over to accept the virtual world as more real than the physical one.

Other performances are superbly engineered: Ivanno Jeremiah as Woodnut and David Beames as Doyle whose roles contribute to the parable of the online world and our relationship with it.

Jeremy Herrin and Es Devlin have created a mind blowing, ingeniously partitioned set where, the dark, functional interrogation room at the front of the stage is contrasted, as the partition dissolves, with a spectacular representation of The Hideaway. It is a brightly lit imagined Victorian retreat and mirrored-designed pleasure garden. Mirrors reflecting images give breadth and depth – absolutely dazzling, and such a brilliant conceit.

The obvious danger in a play like this one is that its ideas will create a distance between the audience and its characters, but none of that. Interestingly, Haley doesn’t take sides, finding devastating consequences both to Morris’s moralising and Sims’s rationalising. So many questions are raised in just ninety minutes as we consider those raised by the online ethics on the internet, our questionable behaviours on line and the potential of future technological development. It provides an endless debate on the limits on consent and freedom and how we form our identity and in turn shows us that we should not always believe what we see. Above all, it considers our sense of responsibility. There are so many unexpected twists to passing judgements on what we see on stage: is it child abuse when the children are in fact the avatars of adults? Such a grey area to send you into moral turmoil!

‘The Nether’ is, undoubtedly, extremely topical and relevant. By focusing on paedophilia and murder to make her point, Haley ingeniously reminds us of human activity to misuse the internet, and where trolling and the 21st century advent of catfishing makes many of us uncomfortable with privacy and human rights when it veers to the abusive.