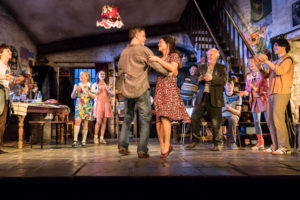 The Ferryman by Jez Butterworth

“This isn’t history. This is now.’ Everyone living in Northern Ireland will become part of this story; this history, whether they want to or not.”

Uncle Pat: “Let’s not be teaching the wean that being English makes you wicked.”

It’s five years since I saw Jez Butterworth’s powerful Jerusalem. Similarly, The Ferryman is a layered and edgy production.

Nothing as it seems. Quinn,( William Houston) who we meet at home in one of the opening scenes, dancing wildly in the wee hours to the Rolling Stones with a woman we assume, is his wife or a lover. She’s not. Caitlin Carney (Catherine McCormack) is Quinn’s sister-in-law and the wife of the dead man. Laura Donnelly, the original Caitlin, was just a child when her uncle was taken away by the IRA, shot dead, and his body dumped in a bog:  the core that Butterworth retells here. There’s a clue in the title, as in mythology Charon ferries souls from this world to the next. McCormack plays a woman whose husband’s body is accidentally uncovered a decade after he was secretly buried, sparking a wave of violence and stirring up almost forgotten memories.  When I saw the play the role was played by Catherine McCormack. The play is set in the same year in rural Northern Ireland in 1981. A lot of old history resurfaces with him and so the family is entangled in Ireland’s bloodstained legacy of violence.

Quinn’s crowded household seems both claustrophobic and yet teeming with the vitality of a never-ending stream of children, teenagers, women and grandparents who come downstairs every morning. And not failing to mention the use of real rabbits, a goose and a baby!  All Quinn seems burdened and burgeoned with,  including his “bedridden” wife, Mary (Genevieve O’Reilly); a married aunt and uncle, both called Pat (Dearbhla Malloy and Des McAleer); Caitlin’s teenage son, Oslin (Rob Malone); and a slow-witted handyman, Tom Kettle (John Hodgkinson), who was taken in as a child after being abandoned by his parents, who were (and this is crucial) British.

The Ferryman is a  masterclass in observing the classical unities, using dramatic irony and building tension.Set primarily over one night in 1981, at the time of Bobby Sands’ death from his hunger strike and Thatcher’s denouncement of the Irish as mere criminals, The Carney farmhouse is a hive of activity with preparations for the annual harvest. A day of hard work on the land and a traditional night of feasting and celebrations lie ahead.

Aunt Maggie (Maureen Beattie), spends much of her time, seemingly in a wordless trance of senility.  But like a court jester, her observations and remarks are both dark and comic. Unexpectedly, her memory of unrequited love reveals one who is sexually repressed: “I swear to Christ,” she says sweetly to the little ones gathered at her feet, “I could have ridden that boy from here to Connemara.”

Above all, the play demonstrates the way hostility trickles down through the generations, so that unruly young men take up their forefathers’ fight.

Rob Howell’s set is designed with the contained chaos that can only belong to a large family full of children. The detail in the props, the drawings on the walls, the posters all add to the melee of confusion. All tinged with exciting moments which include The Undertones’ classic “Teenage Kicks” blasting away the nostalgic tones of traditional tunes that underscore Butterworth’s script. Here the switch comes from a traditional Irish song and when both stop and Aunt Pat kills the music, she lists the name of the Irish men who have died in the Hunger Strikes, ending with the most recent name – Bobby Sands. Everyone is shamed into silence.

A thought-provoking piece about storytelling, about family, revenge,  and the underlying history  of an occupation by a foreign power in land unjustly taken.