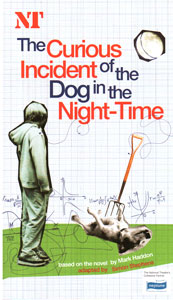 ‘The Curious Incident of the Dog in the Night-Time’: Mark Haddon’s award-winning novel, adapted by Simon Stephens at National Theatre: 8th August, 2012

When I first read the Mark Haddon’s novel on which this play is based, I recalled the set book for my teacher training: John Berger’s ‘Ways of Seeing’. Although it is targeted to the effects and uses of advertising and Fine art, and outdated now, it focuses on the need to understand new ways of seeing an object differently. Therefore I had serious doubts as to whether Simon Stephens’s stage adaptation of ‘The Curious Incident of the Dog in the Night-Time’ would work as the book relied on first person narrative. Exploring the mind of the teenage protagonist, Christopher Boone, is fraught with unexpected complexity of family relationships and as Christopher self-defines ‘a mathematician with some behavioural difficulties.’ The assumption then is that he has Asperger’s Syndrome – a milder form of Autism that characterises his world view so that there is difficulty in understanding the subtleties of language and social situations, recognising and interpreting other people’s feelings and hates physical contact. As Mark Haddon wished, terminology is rendered redundant.

Christopher turns detective after he discovers a neighbour’s dog has been brutally killed. This very act leads him into situations that are terrifying for him as they are outside his daily routine: his timetable. Later, when Christopher learns the truth about the dead dog, we are totally absorbed by his meticulously building of a railway track around the stage.

Despite being far older than the scripted 15 year old, Luke Treadaway’s outstanding performance as Christopher Boone is both engaging and disabling for the audience, for like him, we become outsiders. The set design by Bunny Christie and digital technology from Finn Ross is breath-taking in the intimate space of the Cottlesloe. One minute glowing, geometric grids convey the comfort zone that the regimen of numbers and logic provides Christopher; another moment, we are seamlessly transported from classroom to the London Underground network.

I love the familiar physical theatre choreography by Scott Graham and Steven Hoggett of Frantic Assembly to simulate the chaos of the capital and commuter travel, as Christopher searches for his mother who was presumed dead. The pathos when he jumps down onto the Tube tracks to try to rescue his beloved pet rat Toby is almost palpable. Such moments of distress are convincingly portrayed by Treadaway as he kneels with his face on the ground and moans in attempt to make sense of the world that has betrayed him. Difficulties of parenting are convincingly portrayed by Sean Gleeson and Holly Aird as they struggle to handle their son, Christopher’s neuroses.

Initially, I was unconvinced by the chorus role of Niamh Cusack who appeared wooden in her delivery of chunks of the story, but soon the pace increased and the audience was subsumed into the melee of childhood naivety, distrust and investigation.

Right from the start, the audience is challenged and divided; some like me were greeted by a sign that declares “You are sitting in a prime seat”. I was intrigued enough to see if I would be rewarded with a prime number if I ‘added up’ all the letters in my name, to match the prime number location of my seat -sadly no prize.

Stay in your seat at the end as Christopher reappears, after the apparent natural close, to explain the solution to a maths problem that he finds fascinating: an arresting appendix to a truly mesmerising story telling experience and feat of memory. Marianne Elliott’s production of War Horse was such a joy to watch that I should never have doubted my expectations of this theatre experience. I cried, I laughed, and who can resist the brief appearance of the live puppy near the end?