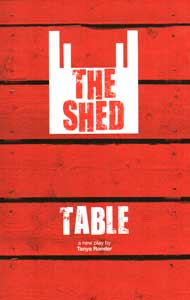 ‘Table’ by Tanya Ronder at The Shed, National Theatre.

Starring the Table which spans generations: marriage in Lichfield in 1898, and continues through the two world wars to a missionary outpost in 1950s Tanganyika,(now Tanzania) then returns to a hippie commune in late 1960s Herefordshire, and ends up in south London today. Gideon (Paul Hilton) becomes the spirit of the table, leading through song and narrative, the journey of the table.  Marks and scratches on the table are inheritance tracks of a troubled man in his eventual attempt to reconnect and find forgiveness.

The weight of the generations carried by the cast of nine, playing twenty three characters between them, is superb even though the character of the Su Linn is irritating.

For a short play, it covers a lot of ground. This is a cleverly written play by Tanya Ronder, and sensitively directed by her partner, Rufus Norris. Their own table which is a record of their relationship provides the inspiration for the play. Yet, three years of intermittent workshops to develop the play have left a slight trace of imbalance particularly in the abrupt sections set in Lichfield. Time-frames are beautifully and seamlessly interwoven by hymns and songs. I wanted to scream when the table’s legs are chopped off! I had to tell myself it’s just a bloody table.

Table is part of the eclectic kick-start of many projects to come in The Shed, the National Theatre’s new space. The theatre’s square construction painted bright red, is located just outside its main entrance in Theatre Square: a substitute venue whilst the Cottosloe becomes the Dorfman, (accolade to Travelex Chairman Lloyd Dorfman).