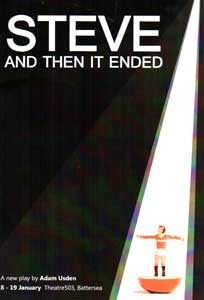 “This is the way the world ends

Adam Usden’s apocalyptic drama is a consciously crafted debut play which is the stuff that popular disaster films have explored for decades. Some people have been unsettled by Mayan prophecy that some catastrophic event would occur and the world would end on Dec. 21, 2012. The focus is on a small family unit to discuss what matters most in the world when that world seems redundant.

It is the end of the world when Steve (Matt Sutton) opens the play, marooned on a chair, dangling a trainer to measure the boundaries of what still exists. Nothing is clear at this stage. Has he survived? Is he merely deranged? Is he in limbo en route to purgatory?  A series of flashbacks offers some initial flippancy and later dark humour. The family eventually provide a collective consciousness uniting together to support and love one another.

The ending, perhaps, is a little too abrupt, but then again, life happens and forever rushes forward. It is an ambitious play which is enjoyable, and though areas could do with some pruning, I look forward to seeing more of Usden’s work.