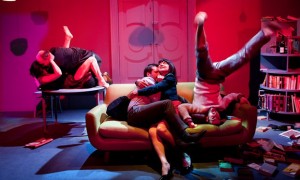 When people are left alone, that’s when bad things happen’.

‘Right Now’ by the French Canadian actress/writer Catherine-Anne Toupin should  be a destabilising, yet rewarding 80 minutes.  Instead, it left me disappointed. The play has echoes of the discomforting relationships in Ian McEwan’s The Comfort of Strangers and Joe Orton’s ‘Entertaining Mr Sloane.’ But the opportunity is lost to create a psychologically, intriguing dark comedy.

We are introduced to bright young couple Alice and Ben, who have just settled into a beautiful new apartment. Their lives are invaded by the pushy neighbours from across the hall. Juliette (Maureen Beattie), Gilles (Guy Williams), and their son François (Dyfan Dwyfor) are unfazed by social convention, and they insinuate their way into the living space and life of Alice and her affable, then cruelly indifferent husband Ben (Sean Biggerstaff).  The neighbours break social taboos from inviting themselves to dinner to boldly stating that they don’t love their own son.  Outwardly Juliette and Gilles show a complete lack of desire for each other whilst flirting outrageously with their young hosts. Things begin to heat up as innocent invitations lead to passionate encounters and unsettling revelations – A very sinister relationship quintet.  Reality and fantasy start to bleed together seamlessly that we don’t know where one stops and the other starts.

Once the atmosphere of a nervous, creepy farce set in, the exit door became attractive, and in a certain light, the neighbours resemble the Addams Family. Juliette is a bit too intrusive, Gilles a bit too seductive, François a bit too odd. Maureen Beattie’s faded vamp Juliette, Guy Williams as her sophisticated but slightly pervy, reptilian and manipulative husband Gilles.

Toupin’s script at times seems drunkenly Pinteresque and occasionally fiendishly sinister but the play tries too hard to mess with our heads.  The script does not quite do enough to fill the gap between the characters enjoying some attention and actually cheating on each other, thus much of the credibility is lost. The Oedipus complex is suddenly brought out in Ben, but the foundations were never there so it feels like a last-minute decision to allow the plot to press on.  The ending, too, is unsatisfying, finishing with a frustrating, ‘Was it all a dream’ denouement. Perhaps Biggerstaff should have remained in his former role as captain of the Gryffindor Quidditch team in the Harry Potter franchise.

What the play does, in part, do well, however, is portray the anxiety and trauma of postnatal depression. Alice’s struggle with her body and her mind after both having a child and then quickly losing one is palpable and believable. Lindsay Campbell, as the unsettled Alice, plays her role with naked vulnerability. She can hear her dead baby crying but doesn’t speak about it with anyone. Director Michael Boyd appropriately traps the audience in the small space and indeed, the success of the production is the space.

Dinner party comedies are a long established and entertaining part of any theatregoers life but not ’Right Now’.

The Bush Theatre is a world-famous home for new plays and an internationally renowned champion of playwrights. We discover, nurture and produce the best new playwrights from the widest range of backgrounds, and present our work to the highest possible standards. We look for exciting new voices that tell contemporary stories with wit, style and passion and we champion work that is both provocative and entertaining.