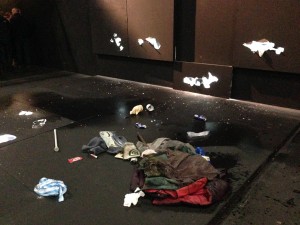 ‘Protest Song’ by Tim Price at the Shed

‘On the first day of Christmas, the system gave to me… a vote in a demo-cra-cy’

A protest song is nothing new. As far back as medieval times, folk songs were used to reflect social dissent, upheaval and inequality. ‘Protest Song’ by Tim Price is a visceral monologue, superbly delivered by the aptly chosen Rhys Ifans who I haven’t seen since his rendering of the blundering Spike in the film, ‘Notting Hill’.  It is the homeless Danny’s 70 minute monologue which literally engages the audience from start to finish. His script is inspired by the London Occupy movement that grew in the autum and winter of 2011-12.

At first, Danny shambles on stage, targeting unsuspecting members of the audience for money to pay for one night in a hostel; and for their phone numbers to prove to some off-stage social worker that he is properly ‘engaging’ with his mobile phone. Each hesitates, conflicted about how to respond. It is all too human to be uncomfortable with what we fear and what we don’t know.  ‘Would you touch a rough sleeper?’ Awkward mumblings or silence ensue. Full lighting makes Danny’s raw interaction with the audience all the more invasive.

The intimate nature of the staging space underlines Danny’s need for territorial ownership; he needs his own comfort space and he destroys our fourth wall by forcing us to discuss disparity of wealth and humanity in general.  Danny recalls  his routine of years of sleeping rough on the steps of St. Paul’s Cathedral  disrupted  by Occupy.  Yet, he finds a sense of community, belonging and purpose in volunteering in the kitchen finding a new impetus in his life, and reluctantly becoming more politicised: ‘everything – every fucking thing – is connected’.

Danny’s volatile nature keeps us on our guard but we are unwittingly drawn in by his anecdotes.  Our nervous laughter turns into complicit satire as Ifans skilfully makes us  ‘friends’ in an adapted version of  ‘The Twelve Days of Christmas’: ‘On the first day of Christmas, the system gave to me a vote in a demo-cra-cy’ . Subsequent days provide two racist cops, three student loans, four bailed banks, six hackers hacking and seven drones a-bombing. But the fifth day is an indelible collaboration that ‘Boris (Johnson) is a c…..’.

Under Danny’s donning of a Santa hat, we are reminded of seasonal expectations of goodwill to all men.

Unawares,  the stage has darkened and Danny is more isolated than before. Polly Findlay’s direction has cleverly implicated us in Danny’s narrative of his street staged begging script of ‘exhaustion, productivity and homecoming.’ We share the first two. By the end, we share the luxury of the third: Danny doesn’t.  After Danny’s aggression is leashed on his own sleep area, we take home his haunting finale:

‘Occupy fucked up my life…it gave me hope!’

Outside the Shed, a noticeboard invites you to note what you might protest against. One read: The Daily Mail

Now don’t give me hope?