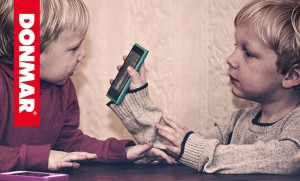 at the Donmar Theatre

Within the first few minutes of the play’s opening, I could be forgiven for thinking that I had walked on to Dara O’Brien’s TV programme: ‘The Science Club’, with a design to tackle the biggest threat to man who thinks he is immune to the prying eyes of the surveillance state. Such is the witty tenor and pace of delivery of razor sharp lines of enquiry that the play seems part documentary and part satirical sketch.

No, this is ‘Privacy’ by James Graham which arrives at the Donmar in a tsunami of expectation after the success of his play, ‘This House’ about coalition politics.

Placing himself as the troubled author (Joshua McGuire) on a journey through the digital quagmire of our age, Graham uses discussions of privacy focused on data collection by giant advertising and analytics companies. The whole cast (Gunnar Cauthery, Paul Chahidi, Jonathan Coy, Joshua McGuire, Nina Sosanya, Michelle Terry) are just superb; very versatile in acting a variety of roles for enquiry.

It reminds me of Pirandello’s ‘Six Characters in Search of an Author’ where the stage is exploited for its illusionary qualities rather than its resemblance to real life. Logic is suspended since the plot is largely a narration of things that have happened: yet these things are re-enacted before our eyes, with results that are absurd. But in ‘Privacy’, the substance of the play is in the investigative interview process of Act I through a fulcrum of psychoanalysts, politicians, journalists and activists unravelling data collected about our identity from corporations and government. The results are real – for many Luddites and tech-users in the audience, as I discovered in the interval, unknown and unsettling.  The overloaded, well researched tutorial encourages interactivity with the audience by using their mobiles to illustrate the nature of free and unrestricted exchange of information. The first half was very entertaining, as humour is derived from looking at how the internet turns something private into something secret, with lines such as: ‘Data you use shouldn’t affect your societal norms’.

The second half of the play purports to address a debate about the improper use of our personal data. There is a brief dystopian reference to the Orwellian metaphor, which focuses on the harms of surveillance.  in summary, we’ve been alerted to the commercial use of data originating for example from loyalty cards and on line search activity to target individuals. We have been reminded about the voluntary relinquishing of private data on social network sites. Lastly, and the most invidious, more awareness of government (whether the NSA or GCHQ) spying on our activities. So even though Graham touches on the privacy versus secrecy issues there is a gaping missed opportunity to hone the play in the second Act for a deeper  privacy versus security debate.

Edward Snowden has brought to light not only how much personal privacy has been compromised, but also how both governments been targeting specific global data relating to markets, banking, world trade and resources. That is what’s critically important for the US and British Governments – for them to lose control of this information would mean losing their competitive edge and power. There is more collusion than we dare think about and it is affecting all of us. Snowden is chillingly conspicuous by his absence although he appears in two brief clips.

Interestingly, at the end, the actors invade our protective fourth wall space by requesting the audience to guard certain personal details in the play. Whilst this complicity is deliberate to avoid spoilers for a future audience, it is symptomatic that privacy is becoming progressively more porous.

Throughout the play, Lucy Osborne’s ingenious set design drives the pace with inventive touches of lighting effects from Richard Howell. All adds to the notion of being amidst endless communication and data streaming.  Credit too goes to Josie O’Rourke who is definitely making her mark as a theatre game changer.

Structurally, the second half of the play needs tightening up. Nevertheless, it was thoroughly absorbing and if it sends the many away debating whether or not the government has a right to regulate online privacy, then some light has been lit. As Independent theatre, Holly Williams aptly notes: the play ‘ is scattergun, never quite joining the dots between the personal and the political.’