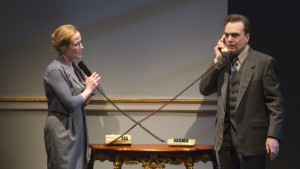 “I can’t give up the idea that suddenly everything will change and my stomach will be my friend.”

I have only dim memories of the 1993 agreement between the Palestinians and the Israelis which had been secretly arranged by a Norwegian couple, who had spent from April 1992 until September of the following year coercing, negotiating, plotting and planning to bring this agreement to life.

The play imagines the events leading up to the accord. Yes,it is long, wordy and jam-packed with names, dates and historical exposition, but also well-crafted and nuanced, with interesting characters injected with humour. The subject matter seems increasingly vital at this time of heightened instability throughout the Middle East.

First we meet Terje Rød-Larsen (Jefferson Mays) and his wife Mona Juul (Jennifer Ehle). From April 1992 to September 1993, the time span of the play, he was director of the Fafo Institute for Applied Social Sciences, and she was an official in the Norwegian Foreign Ministry, working for Johan Jorgen Holst, then-Norway’s foreign minister, who was married to Marianne Heiberg (Henny Russell), an executive at the Fafo Institute working for Rød-Larsen.

The story of how on earth this ambitious and likeable diplomatic couple became such vital power-players is sketched quickly, with the aid of a panoramic screen behind the stage, flashing images up of key, mostly tragic, moments in the Middle East conflict. They are complicated beings in a less-than-perfect marriage with a sometimes faltering grasp of the international time bomb they have set ticking.

Representing the P.L.O. are Ahmed Qurei, the finance minister in exile, suave and tense and unctuous with women, and Hassan Asfour, dour and quiet except when he explodes in vicious rages. Representing Israel, at first, are two “semi-well-dressed” zhlubs, Yair Hirschfeld and Ron Pundak, both economics professors from Haifa. Eventually, they are joined by Uri Savir, the director general of the Israeli foreign ministry, an obnoxiously magnetic Sabra who is half lizard, half steel. Others, including even Shimon Peres, the foreign minister, also appear, though his counterpart, Yasser Arafat, is only present in imitations performed by others. The sheer volume of characters, at least fifteen substantial ones, representing the three nationalities and several more minor figures, at first seems overwhelming.

Played by exacting actors like Anthony Azizi as Qurei and Michael Aronov as Savir, this gallery of types makes for exciting scene work. There is, after all, a lot to chew on: People who at first can barely say hello without defaulting to hostilities are soon sharing family histories while consuming case after case of Johnnie Walker.The food imagery remains constant.

“You are my first Jew,” says Asfour, shaking hands with Hirschfeld after round one.

“I hope I was not too stringy,” Hirschfeld replies.

Whether these characters are truly drawn is another matter. Rogers says in a programme note that some have been excised and some given different roles in the action. The dialogue, in any case, is necessarily his own.

The stars of the political ensemble are Jefferson Mays and Jennifer Ehle as the Norwegian tacticians who pull off the incredible coup of getting high-level officials from Israel and the PLO in the same room and actually talking with one another..

Mona, who always keeps her head and manages repeatedly to pluck victory from the jaws of disaster. But Mona has the advantages, as well as the disadvantages, of often being the only woman in the room.

It is Mona who serves as our wryly neutral narrator, sliding briefly and fluidly out of the action to place us on timelines and annotate references. She and Terje have been ingeniously conceived as perpetual, generally gracious hosts to the play itself and to the social encounters within, pouring drinks, moving furniture and overseeing the seating arrangements on Michael Yeargan’s elegant, minimalist set.

The Israelis are the comedians, deadly serious, but always calculating how to disarm their enemies. When given the stage, they stun their PLO counterparts by telling jokes  which leaves the Palestinians to draw on their own ancient tongue and to play the poets.  No wonder it takes these men three acts to find a common language.

The sense of time passing, and moods darkening and lifting, is also conveyed in Donald Holder’s exquisite lighting, which continually transforms a spare, grey-walled set by Michael Yeargan containing just a few pieces of tasteful antique furnishings :all burnished wood and plush upholstery. Perhaps, the key visual element is a door.

Despite the treaty not leading to a lasting peace, the optimistic message from Rogers (who has previously written about the Rwandan genocide and Soviet occupation of Afghanistan) appears to be that diplomacy is complicated, messy, risky, full of bureaucratic red tape and full of disappointment, but very necessary. It lies in final questions, shared by Juul and Rød-Larsen: Should we have tried; and how can we judge to have succeeded, or failed?

The story of “Oslo” begins with a Norwegian diplomat in a restaurant with an American playwright.

“In early 2012, as my play “Blood and Gifts” was finishing its run at Lincoln Center Theater, my director, Bartlett Sher, arranged for me to have a drink with a friend of his, Terje Rod-Larsen, who was then a United Nations special envoy focused on Lebanon.

The two men and their families had become friends through their daughters, who attended middle school together. Mr. Sher had invited his friend to rehearsals of “Blood and Gifts” to talk to the cast about his work as a diplomatic negotiator in the Middle East.

Late on a bitterly cold January night, we met for warm drinks at an Upper West Side haunt a few blocks from the theater. Mr. Larsen had just seen my play. He was vivacious and charming, draped in understated European finery — including dress shoes so elegant I filed the detail away under the mental heading Interesting Character Trait.

Peppering him with questions, I learned that his wife, Mona Juul, was Ambassador, Deputy Permanent Representative of the Norway Mission to the United Nations. Further, that they had both been deeply involved for years in the politics of the Middle East.”