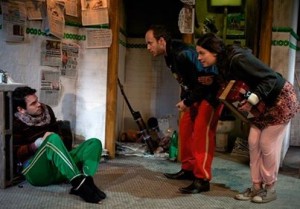 ‘We are creating little territories in your country, a hostile takeover of your garden sheds, houses and your toilets. The occupation has begun.’

Within a fortnight, a return trip to Theatre 503 entertains us once again by showcasing another new talent, Carla Grauls’s unusual and innovative play,  ‘Occupied’. The title is a tidy sound bite to explore a range of issues which are in the forefront today. So in keeping with the dictionary definition of ‘occupied’:

1. To dwell or reside in – Literally, ‘occupied’ evokes public lavatories and thus a disused Victorian loo provides an inventive setting to explore how we can soil, damage and ruin people.

2. To seize possession of and maintain control over by or as if by conquest – Shockingly, the first scene opens to Tom (Luke Waldock) lying tied up and seemingly unconscious on the floor. He is being held hostage by Alex (Mark Conway) and Andreea (Josie Dunn) who are Romanian immigrants living in the toilet.

3. To fill up (time or space) – Alex’s simple motivation for imprisoning Tom is to be empowered by understanding English characteristics, and spend time learning how to be English and fit in order to get a job and to pick up English girls. Josie Dunn’s adept and sombre playing of ‘Rule Britannia’ adds a dark irony to Tom’s interrogation.

4. To engage or employ the attention or concentration of  – At first the central issue seems to be about immigration with the toilet walls plastered with articles from tabloids. Daily Mail headline cuttings such as: ‘MIGRATION – I DO SHARE YOUR CONCERNS – serves as a reminder of Middle England’s approach to cultural stereotypes and prejudices which are deliberately satirised but sadly true.

Quickly, the thrust of the play has a stab at exploring the complex nature of national identity and what it takes to survive in western society. Migration of identity is seen as precarious and contradictory. One minute, Alex and Andreea are savouring their culture through their nation’s music and drinking pálinka, only for Alex, to be destabilised by the ghosts of communism and Ceausescu, cleverly depicted by the repugnant smell of a Romanian bag lady ( Fiz Marcus). In his quest for understanding, Alex is exposed as a dangerous fantasist as he is unaware of his own limitations to realise his expectations.

Conway delivers a gritty performance of Alex’s insecurity and extreme volatility. He is able to rescue Andrea from a brothel yet he manipulates her to prostitute herself and steal to survive.

5. To hold or fill (an office or position) –Tom’s character is less well developed even though Alex sees him as a wealthy self-martyr who has lost the appetite for material indulgence and one  whose earnings have contributed to deep anxieties. Andreea could be labelled as one of the popularised ‘New Fagins’ but invites the most sympathy with her disciplined daily routine of silently saving up the money she has pickpocketed. Alex regards employment as a task that is built on the equality of opportunity rather than oppression, but he merely becomes frustrated.

All the performances were superb especially the edgy, energised Mark Conway – a talent to watch out for.

Despite the serious and sinister undertones, the play’s dark humour is full of wonderful killer one- liners especially when Alex forces Tom to role play a dating scene. Undoubtedly, ‘Occupied’ is play an outstanding theatrical ablution.

As I left the auditorium, I had to smile remembering that when the athlete, Mo Farah arrived as a refugee from his war-ravaged birthplace in Britain aged eight, he knew just a few phrases in English: ‘Excuse me’, ‘Where is the toilet?’ Without adding a spoiler about the play’s conclusion, little is resolved and the human cost is great. There lies the tragedy.

The background to the drama is worthy of mention as a reminder that young talent is receiving some support. Grauls is artistic director of the Hurlyburly Theatre Company. Recently she received the 2013 Nick Darke Award, and has also been noted as a finalist in the Channel 4 Talent Awards in the dramatic writing category and was short-listed for the BBC Writers room Sharps competition during 2008.Occupied was first performed at Labfest 2012, a festival showcasing new plays and received critical acclaim.

The play is directed by Anna Mors; recipient of the Kevin Spacey Foundation grant in 2013.