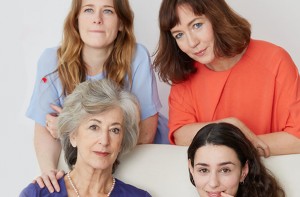 ‘My Mother Said I Never Should’ by Charlotte Keatley

At the St James’s Theatre

It is important to remember that in 1987, plays by female writers were rare. Nevertheless, ‘My Mother Said I Never Should’ is a strange play, with the writer, Charlotte Keatley placing herself somewhere in between social realism and the surrealism of Caryl Churchill. It is typical of its time in that this story of four generations of women in one family (from the 1940s to the 1980s) not only explores the theme of mothers and daughters, but challenges the audience with different theatrical forms. The play addresses the issues of teenage pregnancy, career prioritisation and single motherhood. It is also explores how the different generations break free from parent traditions and culture.

Very simply, Doris, born in 1900 to an unmarried mother, is instilled with a sense of dutiful subservience and self-sacrifice. Her only daughter, Margaret inherits some of those values but is freer to build a career of her own, Margaret’s daughter, Jackie, takes liberation a stage further, but, after an unplanned pregnancy in 1969, she hands her baby daughter, Rosie, to her mother to bring up as her own.

Set mainly in Manchester, the play begins with the four actors as schoolgirls tripping around a playground, innocently planning to kill their mothers. It is a trick start to a drama in which the bonds between mother and daughter provide a central theme.  Initially, this fantasy is both deceptive and annoying. Soon as the non-linear plot skips between the years, Keatley skilfully portrays significant incidents in the childhood of each woman, showing how their past impacts on their present.

Throughout the play, we see how the expectations of the young women have changed in the post war period, with developments in social attitudes, from post-war austerity through the 60s and ‘liberation’ to a supposedly empowered present. At all stages, daughters are presented as estranged from their mothers in some way; most notably Rosie, born in 1971 and abandoned to her grandmother’s care.

The acting is wonderful. Maureen Lipman is brilliant as the waspish yet witty Doris, working-class Lancashire lass, whom we see as an emotionally distant mother, caught up in tradition, a grandmother and a more gracious great-grandmother to Rosie. ‘I may be as old as the Queen Mother but I buy all my smalls at Top Shop, she tells Rosie. The added bonus is the audience’s murmuring sounds of shared experience when many of Doris’s lines unlock memories of the past.

Serena Manteghi convinces us that Rosie is the ultimate victim of a lifetime of deception. Rosie, who appears mostly as a child, was vivid and funny, if a little one-dimensional; Katie Brayden as Jackie had great presence and great control.  Caroline Faber is heart-breaking as Margaret, creating the long-suffering, self-effacing humility of a woman caught in the middle, by her time, by her mother, and her daughter.  Her love that has too little self-love demonstrates the conflicts of a woman looking after granddaughter, Rosie as her own, while both resentful and envious of her own daughter’s independent, career-driven life. She is particularly effective in later scenes, hiding her illness and the pain of a divorce while trying to prove herself in full-time employment. Ultimately, she is a woman born late enough to escape her mother’s narrow life but too soon to benefit from the social upheavals of the 60s.

In all three scenes in the play, there is a feeling of suppression of emotions together with feelings of duty, responsibility and social issues. Margaret who is ever enduring patience and tolerant at times trying to keep an equilibrium between her daughter and Margaret’s mother.

From the onset, Keatley’s targets are the conventions that have given men the power of choice, leaving women to make the biggest sacrifices. The importance of time periods is significant in questioning gender but this is no feminist polemic. Every daughter here has good reason to resent their mother. ‘I knew I hated you,’ says Rosie to Jackie after discovering that she is her mother. ‘I just didn’t know why.’

The set design by Signe Beckmann is minimalist and conceptual. TV monitors are intelligently used to tell us which year we are in and to evoke the period. One particular Pathé News feature about women in executive roles is cringe-making with its patronising tone.

Paul Robinson directs the production with sensitivity and it is because of seeing previous successes by him  at Theatre 503, Battersea, that we ended up here at the unfamiliar Bush Theatre.

Director Paul Robinson says,’ I have wanted to direct My Mother Said for over fifteen years. It’s a timeless and universal play and, unbelievably, it’s the most performed play ever by a female playwright. It’s got four incredible female characters and of course it’s a play about women but not exclusively. It’s really about the Larkin truism that “they f*** you up your mum and dad, they may not mean to but they do…’ but it improves it. The play suggests that, while it’s incredibly hard, we can break the generational cycles of abuse in which we become trapped.

A brand new theatre built in 2012 on the site of the old Westminster Theatre.