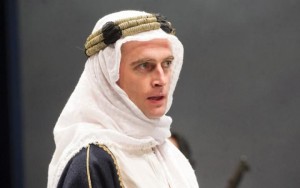 Lawrence after Arabia by Howard Brenton

At the Hampstead Theatre

‘It has to have been real. Because of the pain.’

‘Lawrence after Arabia’ is the latest in Brenton’s sequence of history plays whose subjects have ranged from St Paul to Anne Boleyn and Oliver Cromwell to Harold Macmillan.  Set in 1923 and mostly taking place in the Hertfordshire home of the Bernard Shaw, a haunted T. E. Lawrence, unsettled by his fame and desperate for anonymity, has just joined the RAF under an assumed name. When the news breaks, it causes a scandal for the British establishment.  ‘You can’t have an officer and a gentlemen cleaning lavatories,’ is  the rebuff from William Chubb’s stiff-upper- lipped,Field Marshall Allenby –  Lawrence’s former commander.  At the same time, Lawrence is obsessed with the telling of his story, editing and rewriting ‘The Seven Pillars of Wisdom’ with the help of Shaw’s wife Charlotte (Geraldine James).

Brenton seems interested in why Lawrence had a breakdown after the war. So the premise of the play focuses on Lawrence’s guilt; he is tormented by his role in the deception of the Arab leaders (who were anticipating that victory would bring them an independent Arabia). The Arabs fought on the understanding that they would be granted independence across the region afterwards. Lawrence let them believe this, but knew that the British government had already made a secret deal with French in the Sykes-Picot agreement.

Lawrence and Charlotte have an awkward discussion about whether the notorious episode where Lawrence alleges that was captured, beaten and gang-raped by the Turkish soldiers at the Syrian fortress town of  Daraa ever actually happened. Charlotte wishes to unlock the truth, or otherwise, of that incident, she might surely come to a fuller appreciation of all that he chronicles in his Seven Pillars of Wisdom.

Undoubtedly, TE Lawrence was a fascinating man, complex and contradictory, an icon in his own lifetime, yet also elusive and something of an oddity. Because of this, it’s difficult to leave memories of the languid narcissistic Peter O’ Toole in the David Lean’s epic film. Brenton has certainly done his research. Perhaps this is was what contributes to the self-conscious plodding pace. John Dove’s production lacks dramatic momentum.

Even though the script is stolid, Brenton does succeed is in creating four fascinating characters: Lawrence, Mrs Shaw, Blanche Patch, Shaw’s secretary, and Prince Feisal. Each are well composed portraits of individuals who are complex humans, capable of great insight and great coldness.

Jack Laskey who plays Lawrence convinces us that he is a military officer turned valiant guerrilla fighter, greatly sympathising with the Arabs, adoring their people, and ardently sharing their dreams of freedom. But he’s not convincing as a tortured figure, conscious of his complicity in British betrayal. More rewarding is Geraldine James who luminously suggests the depth of Charlotte’s care for both men in small acts of kindness. There are cameo performances of stereotypes: the nightmare foreign-correspondent, Lowell Thomas for whom his reluctant celebrity became a cash-cow who made Lawrence famous with his iconic photos of Lawrence in Arab dress; and Rosalind March as Shaw’s po-faced secretary, Patch. Who together with Jeff Rawle, as G.B Shaw, (who was scribbling Saint Joan at the time) provide the occasional comic relief.,and Khalid Laith brings poise and bearing to his Prince Feisal.

Michael Taylor’s design of a comfortable, book-lined sitting room (backed by life-sized photographs of the real house) is neat. The furniture and wall slide off stage as the interior opens out to an uncluttered desert setting.

Overall, the play is leaden; few desert flashbacks but these only serve to slow things down. However, the play does serve as an uncomfortable reminder that Britain laid the foundations of the region’s current problems.