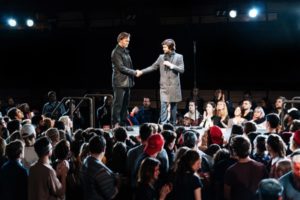 at The Bridge Theatre

“As I love the name of honour more than I fear death.”

I fondly remember an all-black version by the RSC in 2012 but wow, was I pumped up as we entered the Bridge Theatre auditorium.  The charged rendition of “ Rock ‘n’ Roll Star” by Oasis, Survivor’s “ Eye of The Tiger “, during which,  David Morrissey appears in character with ‘Mark Antony’ emblazoned on the back of a sports robe, to egg on the crowd was electric; and more still with the “Seven Nation Army” by the White Stripes! I wasn’t sure whether I was in the wrong venue, but this is orchestrated mob rallying. It is a soundscape springboard through tyranny, conspiracy and tragedy.  It is a reminder that we are the populace who reside amidst the unchanging nature of politics.

In demonstration of the new theatre’s versatility, the theatre has been reconfigured in-the-round with the action playing out on a central platform as well as in the surrounding pit. Promenade tickets are available for those who want to get up close to the action.  Though seated in the front row of the auditorium, we were still complicit in the events.

As you may have guessed, Hytner’s production is reimagined for the era of post-truth populism; it’s in modern dress, and the parallels with certain current world leaders are evident. But there’s no fiasco as there was earlier last year,  when a New York production of ‘Julius Caesar’ got into trouble for depicting Caesar as Trump, assassinated by women and people of colour. We do have Caesar’s minions selling T-shirts emblazoned with “CAESAR” instead of “Make America Great Again,” also pin badges before the show, and the man himself sporting a red baseball cap bearing his own name. These are not gimmicks but a very real precursor to our perspective on the nature of power.

David Calder’s narcissistic Caesar emerges red tied and casual in golf clothes, as the band revs up the crowd climactically with Twisted Sister’s “We’re Not Gonna Take It”.  At times he displays insouciant charm; at others he is s given to impulsive decisions, an almost childish tyranny.  His surrounding security staff are reminiscent of Mussolini’s Blackshirts, shouting and pushing the stand-up audience back and forth to make way for the platforms that ascend from, and disappear into, the floor. “The Groundlings” are used as the crowd/mob and manoeuvred/manipulated round staging platforms that rise and fall in the acting/audience space. Not sure what happens if you don’t have a biddable audience. The more so when the Bard’s words slip as one actor shouts: “Pompeii is dead, Get over it!”

While the gender-swapping adds some interesting new shades to certain characters and relationships, there were moments of inconsistency, however, it  goes to show that gender parity requires commitment, not comment.  At first, Michelle Fairley’s female Cassius seemed lightweight, but very quickly made her conniving mark of persuasion. Driving the opposition further is Adjoa Andoh’s interpretation of the acid-tongued Casca. Later,  the urgency is picked up by Casca, as the conspirators realise they have created a far worse situation without Caesar.

Ben Wishaw as the Chekhovian Brutus, is a very liberal intellectual yet unwittingly unworldly and naïve, as he vastly underestimates the opportunist, Mark Anthony., soul-searching “No country was ever saved by good men,” Horace Walpole once observed, “because good men will not go to the length that may be necessary.” Antony employs a microphone to blast the opening phrase of his eulogy: ‘Friends, Romans, Countrymen, lend me your ears’, being well aware that the crowd has already sided with Brutus who has spoken before him. In a ploy to calm the blood-thirsty Romans, Antony astutely praises Caesar’s assassins as ‘honourable men’, but the moment he senses his power to sway the mob to his will, he abandons the microphone, speaks plainly to them then deftly, flaunts a will with Caesar’s seal. chilling.

Cinna the poet is torn apart in the streets just for having the same name as Cinna the conspirator.

As expected Bunny Christie’s set design keeps us guessing: using platforms that rise and fall, Brutus’s study, the red-thronged grandeur of the Capitol, the final wasteland of defeat.

This Caesar may not be one for the purists but it is the kind of boundary-pushing Shakespeare that I would have loved to take my students to before I retired from teaching English. It is a judiciously cut non-stop two hour production which feels like a thriller. It’s not without its flaws. As with many Julius Caesars, this final stretch plays out like an anti- climax.

Veni , Vinci, Vidi and I bought the T-shirt, bearing the empty populist slogan “Do This!”