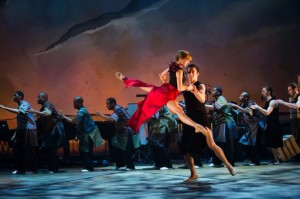 ‘Home is beautiful. I will now go back home, because they love me there.’

‘Inala’ translates as ‘the abundance of goodwill’ and ‘harvest to reap’ in Zulu. This ambitious project is the brain child of composer, Ella Spira and Royal Ballet dancer, Pietra Mello-Pittman (aka Sisters Grimm) creating a new language of dance. South African choir Ladysmith Black Mambazo (LBM) , in particular, Joseph Shabalala collaborate on this dance-theatre production with Ella Spira and choreographed by Rambert Dance Company artistic director, Mark Baldwin.
On stage, the nine singers and 11 dancers, some from Rambert and the Royal Ballet, are all performers together. The dancers don’t sing, but the choir do dance.
Unless you speak Zulu, it’s impossible to know what the choir are singing as there are no surtitles to the eighteen songs – but it doesn’t really matter. There is no obvious narrative line. Instead, for the most part, we are given fleeting glimpses into the lives of ordinary people, going about their work, living their lives.
There are snapshots of delight both physically and musically: some of the younger singers pulling off dramatic high kicks and even a back flip; while elder member. Albert Mazibuko comically shrugs his shoulders in defeat, as he walks off. Convincing birdlike dance movements and cacophony of car horns and traffic noise signal a change in tone. The upbeat, playful mood is replaced by fear and frenzy, limbs trembling, lightning crashing and a gun shot. Designed by Georg Mayer, there are few costume changes but they mostly consist of smooth leather bird caps with feather plumes.
Sadly, in the end, it is a forced, disjointed union of different cultures and styles. Balletic movements do not sit comfortably with feral African energy; classical duets and solos were simply too classical so dance obscured the singers.
With echoes of LBM’s traditional routines, I found myself shutting my eyes to savour the music alone: the more the vocals, the better a piece sounded. However, the intrusive orchestration, adding piano, violin and cello dilutes the spirit of the production.
Temple Clark’s set design would be more effective in a smaller venue than The Anvil. Here, the primitively rendered landscapes with two elongated wisps of cloud were lost. Yet the soft lighting eases us from day to night.
I last recall Paul Simon famously working with LMB for his 1986 album Graceland – now that was a true marriage of cultures. Nelson Mandela called LMB, the South Africa’s cultural ambassadors to the world. Call and response songs invite response – I cannot speak for audiences in other venues but here in Basingstoke, the audience comprise principally of white middle class who do not engage automatically with the genre. Overall, this hybrid production was a glass half empty.