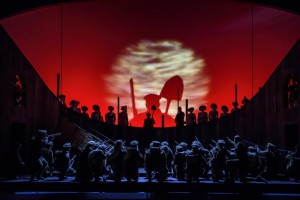 ‘In Parenthesis’ by Iain Bell.  Libretto by David Antrobus and Emma Jenkins,

At The Royal Opera House

Unknown to me, David Jones was a London Welsh poet who fought in the First World War with the 38th Division of the 18th Royal Welch Fusiliers, returning with shell-shock to write an epic poem in prose and verse, In Parenthesis; the parentheses being the brackets around the years 1914-1918. The opera was launched to coincide with the 100th anniversary of the Battle of Mametz Wood which took place on 11-17 July 1916, and at which Jones’s battalion alone lost 263 men. 2016 is something of a significant year for the Welsh National Opera. They are celebrating their 70th anniversary, continuing to produce extraordinary and successful productions year after year, even as the popularity of opera fluctuates. Sadly, the problem with the production is the source material.  It does not translate easily into opera, not least because it barely has any plot.

In light of all the plaudits for this production, there is little I find satisfying.  Perhaps, this is because the opera doesn’t spend enough time with any one character to make them come entirely alive. It may also account for the two parallel worlds in the work: the real world of life as an infantryman on the front line and a world where Arthurian knights seek the Holy Grail.

Interwoven with scenes of the trenches  are otherworldly occurrences,  together with the presence of two actors playing the Bards of Britannia and Germania, characters that would seem more at home in a staging of ‘A Midsummer Night’s Dream’ than on a World War One Battlefield. By the end of the opera, it subsumes the temporal world so that these soldiers have completely become one with their ancestor warriors of the past. They’ve become legends in their own right.

That then allows us to have this resurrection at the end, where the Queen of the Woods changes her form into the benevolent giver of life. She garlands the men and each of them receive a special flower that allows them to then be reborn in nature with the promise that they will live with her for a thousand years. It is a dreadful tragedy of course. But the extent of this fails to be conveyed.

The librettists,  Antrobus and  Jenkins have also created two major roles and a (female) Chorus of Remembrance, which serves to drive the narrative, and the overall theme is about the healing power of Nature. Composer,  Iain Bell draws from some very diverse sources. His music includes settings of a traditional Welsh folk song and a Latin hymn.

With so much going on it is not surprising that the work seems to lack focus at times as there are too many disparate elements contributing different parts of the story.  And while the music is generally accessible, it often overwhelms the words. The result is that the men’s and ladies’ chorus lines weren’t delivered with proper authority. Without any big arias to cement the action, events merely plod on. And yes, it isn’t supposed to represent events as they actually happened, but some dramatic thrust is needed.

The music conceived on a more bombastic scale is less convincing, and the female Chorus of Remembrance, already a slightly invasive presence, is overwhelming when they reappear as Dryads.

The set itself is perhaps the star – deceptively versatile, changing with ease from a parade ground to a ship, a café to the soldier’s final resting place, Mametz Wood. The female chorus become sinister tree like spirits, and suddenly we are presented with a wood that is alive, threatening.  A backdrop formed of a sheer projection surface encircles the entire back of the stage is utilised to startling effect, at times a peaceful sunny sky, at others the night over a torn battlefield.

At the end, the fallen soldiers, strewn across the stage, are reclaimed by the land on which they lie, the Queen of the Woods calling forth new life on their shallow graves. In what should be a terrific piece of symbolism – a parallel to the placing of wreaths in memorial services becomes awkwardly comical. The female chorus place straw hats bedecked in flowers on the bodies of each man.

I was looking forward to an innovative, stimulating opera, instead I was left with my own sense of Owen’s ‘Pity of War’.