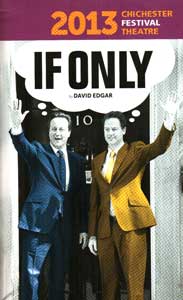 ‘If Only’ by David Edgar

‘It would be more surprising if there was not a ripple of anxiety across both parties.’ Nick Clegg

Orwell’s ‘1984’ may have been visionary enough to sustain it beyond the date of its title but this play was a risk with the ever shifting political seismic plate.  David Edgar could not have foreseen the  dystopian success of UKIP in the local elections last May which was needed to reflect this latest shift in British politics. In an age where we saw Masa Serdarevic, who became the face of the banking crisis when she was pictured on the front pages leaving the Canary Wharf offices of Lehman Brothers for the final time in 2010, making a big impression on Sir David Hare: it led to The Power of Yes, his own take on the crisis. I expected more from David Edgar who has made his reputation as a political playwright.

Structurally, the play is threefold, beginning in April, 2010, the day after the first televised prime ministerial debate; it jumps forward in time to imagine what might have happened by August 2014. The drama opens in Malaga in Spain where a Labour special adviser, a Lib Dem staffer and a Tory MP, who ran into trouble over the Telegraph Expenses scoop, find themselves stranded at the airport as a result of the Icelandic volcanic ash cloud.

The dilemma of negotiating the journey home was as plausible as I remember experiencing.

All three of them already recognise that the election could lead to a hung parliament and they discuss what might happen.  It is all so potentially explosive in conversation that the three of them write down a secret that would end their political career if it were revealed, and entrust it to another to ensure that their conversation isn’t leaked.

Ruth Sutcliffe provides a realistic backdrop of constantly changing flight boards which part to allow a clapped-out Peugot 205 convertible to emerge and take centre stage on the revolve. An added frisson is the acquisition of a fourth passenger; an A-level student who is also trying to get home, and holds up  a mirror to the covert negotiations, supposedly offers the challenge of what a first-time voter might think.  The script grates considerably with this caricature of youth with the word ‘like’ inserted at every opportunity.

There are some strong performances from all three key players – Charlotte Lucas, Jamie Glover, and Martin Hutson – as well as from Eve Ponsonby but all  were constrained to type.

When we’ve had ‘Yes Minister’ in the past and the more recently ‘West Wing’ and Denmark’s ‘Borgen’, England’s  Lucy Prebble’s ‘Enron’, this is disappointing. I found the earnest political theorising so dull that I did fall asleep from time to time. Yes, there is wit in identifying the lunacy of the language that’s used and the identifying the authorship of the different manifestos though like Bernard Shaw, Edgar does go on a bit.

As with the dilemmas of the Cameron/Clegg coalition, the topicality of the play does mean it’s unlikely to last despite it warning message. The production is billed as a “witty exploration of the morals dilemmas” that affects coalition parties. If only Gordon Brown had switched his microphone off. If Only…..