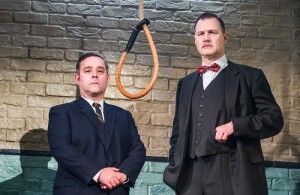 Hangmen by Martin McDonagh
At the Wyndham’s Theatre
January 7th, 2016

‘They could’ve at least sent Pierrepoint. Hung by a rubbish hangman, oh that’s so me.’
2015 marked the fiftieth anniversary since the abolition of the death penalty in England, and Hangmen acknowledges history through references to Hanratty – one of the last prisoners to be executed in the country. ‘Hangmen’ topical is a dry, black comedy set in the late 1960s. It is about a retired executioner, Harry Wade (played by David Morrissey and presumably named after real-life hangmen Harry Allen and Stephen Wade) who’s embittered by playing second fiddle to chief executioner Albert Pierrepoint. The play opens in 1963 with gallows humour in a brutal arresting scene of Harry’s cold-blooded hanging of a desperate young man protesting his innocence.
We’re whisked forward to a pub in Oldham, two years later, on the day that hanging is abolished. The owner, Harry is now displaced in society and no longer a ‘servant of the crown’, but whose 233 executions just two years previously were deemed by the law as a quick, clean and dignified way to dispose of a murderer – far more proper than using the guillotine, which is ‘messy and French’. The male-dominated pub is patronised by a sycophantic, goonish regulars enjoying Harry’s dark notoriety. Harold Wilson’s government has just abolished capital punishment and the press want Wade to give his verdict, which he does in staggeringly bumptious style. Morrisey, distinctive in his suit and dickie-bow tie, towers over all, simultaneously gives us Wade, the bully and Wade, a coward. Still in the shadows, Wade’s former assistant, the self-effacing Syd (Reece Shearsmith) struggles with his own identity against a barrage of Wade’s mean-spirited gags.

Many pub line exchanges depend on shock value as the text is steeped in the petty ignorance and prejudices of the sixties: with the casual racism, sexism, homophobia, xenophobia, reminiscent of Alf Garnet in ‘Till Death Do Us Part’.
The plot twists and turns with the entrance of a cocky young southerner, Mooney (Johnny Flynn) with shades of Malcolm McDowell and Russell Brand. His presence quickly raises questions. Is he seeking lodging. Or perhaps revenge? Flynn gives an edgy, enigmatic and deceptively confusing side to Mooney who is able to reference Kierkegaard and Nietzsche. In the background is Wade’s gin-drinking smoking, wife, Alice (Sally Rogers) and ‘mopey’ teenage daughter, Shirley (Bronwyn James)who promptly goes missing. Everyone (including the audience) is led to fear the worst. The second act, meticulously structured, plays out like a black farce as things get nastier and indeed funnier.
High up, a cafe scene on a rainy day between Mooney and Syd sets up some suspicions and these are being explored later in the pub, when the commanding Albert Pierrepoint (John Hodgkinson) makes his entrance to take Harry to task for what was said in the newspaper article. We see Harry crumble, reputation and all.
The infamous and frequently referenced Pierrepoint (John Hodgkinson) finally makes his entrance halfway through the second half; we give him a hearty, familiar laugh just for walking through the pub door.
All that’s left for these ex-hangmen to do now is correct one another for saying ‘hung’ instead of ‘hanged’.
Usually, I dislike Ortonesque farce but here it is cannily played with a corpse behind a curtain. McDonagh’s writing is sharp, the plotting clever and characterisation skilful. His trick is to keep us laughing right up to the end. Matthew Dunster’s production is certainly impressive and sharply acted on Anna Fleischle’s set of a grim green prison cell yielding to a dingy northern boozer.

…………………………………………………………………………………………………………………………………………………………..
In the play programme notes, Patrick Lonergan, writes:
In the world today, almost 40 nations are still using the death penalty. In most countries, you can be executed for only two crimes: murder and treason. But in a small number of places, the state is willing to kill you for other reasons too. Being gay, for example, Or committing adultery. Or practising witchcraft.
The death penalty has its supporters, of course. Fifty years after capital punishment was abolished in the UK, survey after survey shows that a majority of voters here favour its re-introduction, especially for such offences as child abuse or terrorism – despite the fact that we’ve seen repeated evidence of people wrongfully convicted of capital crimes, here and around the world.
And indeed, at the heart of positive attitudes to the death penalty lies a fundamental incoherence: killing someone, we’re told, is so severe a crime against our society that the only way to avenge it is … by killing someone.