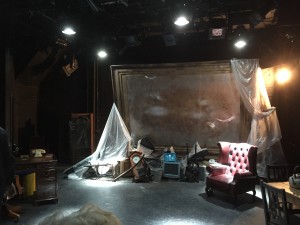 ‘Whenever there are human beings, there is fraility’

Written when he was in exile in Denmark, Bertolt Brecht’s openly anti-Nazi play, ‘Fear and Misery of the Third Reich’ is set in 1930s Germany. Phil Wilmott’s clever production is chillingly relevant today. The backdrop serves both as a window and mirror to create the illusion of reflection, transparency and coercion – we are looking at lives through a distorting political prism.
Through a series of sharp vignettes, Brecht creates a picture of suspicion and anxiety experienced by ordinary people in National Socialist Germany of the 1930s, particularly Jewish citizens, as the power of Hitler grew. Wilmott exploits the episodic approach which is held together by an undercurrent of fear. For example, in Berlin in 1933, a storm trooper eggs on a worker to make jokes about the regime and shows him the trick of marking a suspect with a chalk cross on the back of his jacket, unawares. There are charged moments such as Tori Louis’s woman suddenly saying the wrong thing to a radio interviewer or realising what she has had done after accusing a neighbour that give an instant image of vulnerability.

Jeryl Burgess’s cook is won over by the Nazis; Harriet Grenville’s young woman notices how her fiancée has changed since he joined the SA. Neighbours bicker as a butcher hangs himself sporting a bitter sign around his neck: ‘I voted for Hitler’.
Scenes are linked by a narrator ( Joe Dowling), music and some cross-casting; all knit together by theme of social and moral breakdown.

The very first scene brings us into the heart of things: the arrival of the cast in unsettling Hitler masks which through the audience’s hindsight, deliver an uncomfortable knowledge of what comes next. One uncomfortable story follows another, overseen and oppressed by the ushers in their SA uniforms – thugs, full of testosterone. We witness the breaking of Joshua Ruhle’s unemployed man’s spirit, the cruelty of Ben Kerfoot and Tom Williams’s Hitler Youth members and Feliks Mathurs’ predatory SA man. It is transparently clear how thought and action can become paralysed by the power of the totalitarian state – a reminder of the importance of resistance and action.
Four scenes stand out: a couple paranoid that their child has been turned into a spy after he disappears following the husband’s criticisms; a venomous member of the SS gives a demonstration as to how he traps and betrays people; and the judicial system exposed as corrupt with a he sketch about the judge who is about to try a complex criminal case in which a Jew, Stormtroopers and the Gestapo are all involved. He knows that whatever judgment he makes will be wrong and that he will be made the scapegoat; a Jewish wife decides to leave her non-Jewish doctor husband so that he will not lose his career. She says she is going to Amsterdam for two or three weeks but they both know (and to his barely disguised relief) that they will never see each other again.
Wilmott himself plays a judge caught in an impossible dilemma, as he struggles to please corrupt leaders and the vicious serenity of Christopher Laishley’s his superior, party-member judge. A memorable moment throws up the ambiguous line: ‘Justice is what serves the German people best.’
Throughout the dark play, Willmott’s direction is faithful to the Brechtian model verfremdungseffekt or V effect as it is sometimes referred to; alienating the audience (making them separate from the action) but it actually translates more closely to ‘distancing.’ Brecht definitely wanted his audience to remain interested and engaged by the drama otherwise his message would be lost. To some extent, Brecht is breaking from his usual style by demanding that the audience have empathy with the repressed.
The stage is effectively exploited, in turn, a home, an office, a kitchen and even a street. At the rear of the playing space is a very large mirror which becomes translucent with Jack Weir’s lighting. Sadly, the scenes which should have been akin to peering through the looking glass were not possible for us, due to an electrical fault but it did not deter the audience’s enjoyment as the cast adapted convincingly.
We loved this production, having seen a few years ago, Brecht’s famous anti-Nazi propaganda epic, The Resistible Rise of Arturo Ui : a comic caricature portraying Hitler and his Party as Al Capone and Chicago gangsters.
…………………………………………………………………………………………
Phil Willmott is a multi-award winning director, artistic director, playwright, composer, librettist, teacher, dramaturg, arts journalist…. and occasional actor. He has worked in theatres across the world on everything from classical drama, musicals and family shows to cabaret and cutting edge new writing including notable productions at Liverpool Everyman and Playhouse, Sheffield Crucible, The National Theatre Studio, Nottingham Playhouse, in the West End and for ten years as an associate artist at B.A.C. He is Artistic Director of his own multi award winning theatre company The Steam Industry (incorporating The Finborough Theatre and The Scoop outdoor amphitheatre on the South Bank) and also works as a broadcaster, arts journalist, playwright, lyricist and composer. He’s been a recipient of a Peter Brook award for innovation and entertaining theatre for his classical and family shows, a T.M.A award for outstanding musical production, whatsonstage award nominations for best regional and Off West End productions, a Brooks Atkinson/Royal Court award in new York for playwriting and 4 Spirit of Broadway Awards.