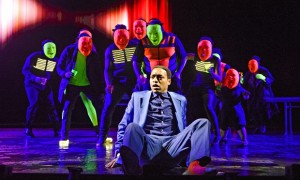 ‘Everyman’ at the National (Olivier)Theatre

Wow! This is Rufus Norris’s first production as artistic director of the National Theatre and he is starting inventive in every sense from the drug-fuelled raves to a seductive Donna Summer soundtrack. The production design pulses with energy, even in the moments of quiet reflection. Much of the original’s theological substance has been stripped away. Poet laureate, Carol Ann Duffy’s writing is characteristically edgy with lines such as ‘Religion is a man-made thing. It too will pass.’ At times, however, the predictable rhyming and the lame humour from contemporary references to loyalty cards and Beckham and even Cliff’s colostomy bag seem disappointingly puerile.

The play opens with a weary-looking cleaner (Kate Duchêne) mopping the stage. Contrary to expectation, she is God. None of this is particularly apparent from an audacious, wordless opening scene, in which Everyman, played by Chiwetel Ejiofor, a big star who’s never forgotten the stage, descends on a wire from the Olivier’s ceiling. He then runs vertically, in slow motion, down through the pit in the middle of the stage, before re-emerging into the hedonistic raunchy excesses of his 40th birthday party.

Ev (as Everyman is socially defined) is called to account by Death, a chilling, flippant and funny Irishman (Dermot Crowley) who delivers his lines with insouciance. Has he lived well in the true sense? Throughout the 100-minute drama, and a tidal wave of surreal scenes, Ejiofor’s character is a charismatically powerful performance. He is an allegorical representation of mankind, meets an array of allegorical characters as he assesses his past life: his Knowledge, Kindred (family) and Good Deeds and the non-believer. He scrabbles reflectively in his search for salvation, offering money, seeking escape routes; No one will endorse his values. When he tries to impress the seriousness of the situation on his sister, explaining that he has met Death in person, she merely snaps at him: ‘Namedropper. Throughout, Ejiofor delivers a charismatically powerful performance.
There are many memorable cameo scenes from synchronised coke-snorting,  worldy goods as gold-gilt mannequins, neon ghosts in Everyman masks and the encounter with his former self, Everyboy on a retro scooter.  As the bag lady called Knowledge, Penny Layden makes a great job of a tricky role until she whips out a (presumably) prosthetic cock and , shockingly, urinates all over the stage and Everyman. At one point Everyman throws his money into a giant wind machine to show his ultimate realisation of its insignificance. ‘I thought the Earth was mine to spend, a coin in space.’ This symbol of conspicuous consumption is wheeled and whipped around blowing rubbish into our faces.
Tal Rosner’s sculptural videos gliding past and Javier De Frutos’s choreography have a powerful, debauched physical vitality. Although the score by William Lyons is a wild blend of medieval melodies and pulsating electronic sound, it’s the visual arsenal of stage effects that resonate with this seductive pimped-up re-working of the15th-century morality play.