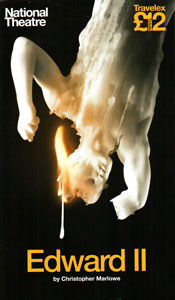 ‘Edward II’ by Christopher Marlowe at The National Theatre.

‘What are kings, when regiment is gone,

But perfect shadows in a sunshine day?’

‘Edward II’ is not a play I would normally choose but I was curious to see John Heffernan in his first major titled role and Kyle Soller, a young American actor who have had recent praise. As a student, the conspiracy theory that Marlowe may have written the works attributed to Shakespeare also intrigued me.

It is clear from the pregnant pauses during the opening coronation ceremony that Edward is going to battle between his private indulgences and his public duty to state and church. Soon we are launched into Heffernan’s frenzied, petulant portrayal of Edward as a young king who is unable to surrender his passionate and corrosive relationship with Gaveston. Unlike  Shakespeare’s ‘Henry V‘  Edward is unable to distance himself as kingship demands. Passions drive the pace of the play that at times the language gets lost in the noise of the corrupting power of entertainment and military conflict. Conscious repetitive thrusts  of ‘Music‘ and characters’ intolerance through the word ‘brook’  did grate.

The incompetence of the sovereign to manage his royal duties makes the body politic vulnerable.  The Wheel of Fortune kicks into action and hubris is a defining weakness. The turning of the Wheel removes Edward II from the throne, and, in turn sets up Mortimer confidently delivered by Kobna Holdbrook-Smith. Vanessa Kirby’s neglected Isabella lost control as affections switched from Edward to Mortimer.  Next Mortimer falls and is replaced by the young Edward III played by a diminutive adult female. Further gender swapping of Kent, Edward’s brother ( Kirsty Bushell) and Pembroke ( Penny Laden) proves clumsy rather than innovative.

From the outset, the audience’s expectations are challenged by the set: an apparent mismatch of the past epitomised by the central, traditional king’s throne; and to one side, a long altar-like table, dressed with golden trophies of office.  In contrast, and unusually, we have access to the side lines of a plywood contemporary backstage. The latter is cleverly exploited with live video shots of the darker subversive activities of plotting against the king or just sheer debauchery.  In part,  Lizzie Clachlan’s design is plausible as the play does explores a world which is caught between an old order of hierarchy and structure, and a new world of liberalism, self-expression and individual freedoms. So when the infamous Gaveston emerges from the auditorium, dressed in skinny jeans, the sense of something new does engage us.  Throughout the play,  Kyle Soller’s Gaveston is deliciously volatile, manipulative and invasive.

Reminscences of Baz Luhrman’s ‘Romeo and Juliet’ came to mind when scene titles appeared on large screens distrusting  the audience’s intelligence to follow events. Perhaps like the film, this production is aimed at a younger audience. Certainly, laughs triggered at the points where the modern world – the anachronisms such as the cigarette smoking telephone exchanges – clashed with the setting.  A predominantly older audience seemed at times homophobic and certainly,  myelderly neighbour was tu-tuttingly uncomfortable by the prolonged kissing by Edward and Gaveston.  Gibbins’s production left none in doubt about the erotic sexuality of their relationship. Interestingly, homosexuality was a fairly common practice in the upper-classes and among courtiers of the time.

For me, Marlowe’s language lacks the breadth and colour of Shakespeare’s history plays, though Edward’s suffering at the end of the play is palpable.

Good theatre is sometimes about risk taking. Director Joe Hill-Gibbins’s production is fearless, at times heart-stoppingly exhilarating yet flawed and reckless. Although, I found the production frustrating at times, it was a worthwhile, animalistic revival.