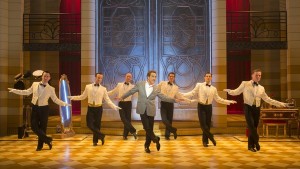 at the Savoy Theatre

A guest review by Claire Linney

Since my mother hardly relishes the world of Musical Theatre, I have been coerced into writing a guest review on my latest trip to the theatre to watch ‘Dirty Rotten Scoundrels’, based on the Steve Martin and Michael Cane film of the same name. I should add, before I begin, that contrary to almost everyone else I know who loves Musical Theatre, I hated ‘The Producers’ so I might not be the best person to be critiquing this particular style of the genre. However, I can’t deny I thoroughly enjoyed ‘Dirty Rotten Scoundrels’,.

Jeffrey Lane’s book is witty and engaging; the art deco-inspired set design beautifully creates the  novel’s scene of a decadent casino culture in the French Riviera. We are introduced to the two conmen; the suave, effortless charming and ruthlessly exploitative Lawrence Jameson (Robert Lindsay) and the rough edged, coarser, but no less determined protégé, Freddy (Rufus Hound). An initial harmonious partnership in fleecing the Riviera’s wealthiest visitors quickly descends into a wager between the two conmen then predictably chaos and hilarity ensue.

Robert Lindsay is undoubtedly the centre of the piece, gliding his way masterfully through the scenes and fully embracing the role of the  ‘aged playboy’, I was only slightly distracted at times by the feeling that the only person enjoying his performance more than the audience was Lindsay himself. Despite a few less-than-slick transitions into musical numbers Rufus Hound also does a credible job of providing the foil to Lindsay’s suave conman with a coarse but lovable rogue; the image of him dry-humping Robert Lindsay will stay with me for a long time.

In support, Samantha Bond beautifully hams up the part of a wealthy British heiress who has a lovely side romance, both touching and comical, with Andre the Bodyguard, skilfully played by John Marquez. Ultimately, as in all comedy con plots the two conmen must end up in over their heads. Their comeuppance arrives in the form of Katherine Kingsely as the optimistic, endearing American heiress they must both attempt to woo. Kingsley’s outstanding vocals and performance in the ultimate scene, manage to both impress and threaten to steal the limelight from both her leading men.

David Yasbeck’s musical numbers encompass styles from an Oklahoma styled western to big power ballads. While the choreography is slick and entertaining, there doesn’t seem to be any unity or theme to the composition. As a result the numbers feel more like an add on rather than an integrated part of the storytelling. So overall, it’s not subtle or surprising, but it’s big, bright, brash, and thoroughly entertaining. And that’s more than I could say for ‘The Producers’.