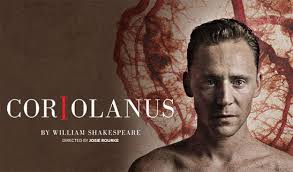 ‘We can’t trust any politician to tell us the truth.  Faith, there have been many great men that have flatter’d the people, who ne’er loved them.’

Coriolanus is a political drama whose themes are a reminder that Shakespeare’s plays still resonate over time.  Here, we have a Roman military hero’s bid for public office but it turns to tragedy after his enemies make use of his fatal inability to relate to the common people. It’s a study of hubris versus politics. Coriolanus is a successful leader on the battle field and a skilled warrior.  Any humility he displays when he returns to Rome victorious after defeating the Volscian army is short-lived when old prejudices and grievances with the plebeians surface.

The ominous opening sees Coriolanus’s young son Martius outline a diamond-shaped acting area on the floor in blood-red paint against  designer, Lucy Osborne’s backdrop of ‘Grain at our own price’ graffiti –drawn on the bare Donmar walls. Food in the modern world continues to be used as a weapon — albeit a political one.

Enter Menenius , ( Mark Gatiss) as Coriolanus’s political tutor and spin-doctor, with a crowd- calming fable of the body politic, a traditional way of likening the functioning of the state to that of the human body. It soon becomes clear that the body politic has broken down. This breakdown in the relationship between patricians and plebeians is as dangerous to the health of society as a breakdown in the relationship between belly and body parts would be to the health. Gatiss delivers this as a ‘humorous patrician’ but also has some splendid Peter Mandelson moments which we all can recognise.

Coriolanus’s disdain for the lower class citizens of Rome become transparent as he likens them to the monstrous Hydra.  It also betrays the fear felt by the ruling class of both ancient Rome and Elizabethan England that the people, once given power, would prove ungovernable. The debate about the degree to which popular representation should prevail remains a current issue here and in Europe.

Shakespeare demonstrates this early in the play when a civil insurrection illustrates the political confrontation which existed between the classes. Instead of offering compromise and understanding, Coriolanus reacts with anger and inflexibility. His responses are always the overpowering responses of the military leader and he never becomes the benevolent politician.  Tom Hiddleston’s Coriolanus deserves the pre-run hype to attract the punters on the back of  Loki in ‘The Avengers’ and the two Thor movies. Undoubtedly, Hiddleston’s credible public disdain combined with a profound attachment to his mother, Volumnia is raw, resulting in a willingness to risk everything rather than endure her rejection. Even at the end, she shames him by kneeling to him—a shocking reversal of ancient Roman standards calling for children to show reverence to their parents. Hiddleston successfully combines ascerbic humour and heroism

And thus, Deborah Findlay’s feisty portrayal of Volumnia  buys into Rome’s violent, warrior culture. Volumnia’s moral code—and thus that of Coriolanus —is seriously flawed, and this is made clear in Shakespeare’s depiction of a warped sense of maternal love. Here is a mother who has trained her son to be a war machine, ‘I hope he comes home broken and disfigured’.

Borgen’s Birgitte Hjort Sørensen is somewhat redundant as Coriolanus’s wife, Virgilia – a part lost in abridgement. She is reduced from the spin-doctor in Borgen to a suffering needlewoman who provides a foil to her forthright mother-in-law. Though her role is small, her modesty does offer a distinct and significant emotional note that contrasts with and emphasises the more strident tone of her husband.

Not totally convincing, however,  is the gender-switched Sicinius (Helen Schlesinger) who together with fellow schemer, Brutus (Elliot Levey) deliver a comedy duo that seems awkward at times.

Coriolanus is a tough play to stage at the best of times – big, bloody battle scenes, riots on the streets of Rome and battles on the Senate floor, so credit goes to the great strength of Josie Rourke‘s production for the clarity and intelligence achieved by stripping the play down to its visceral essence on an almost empty, small Donmar stage. What works in this society is politics in the sense of lying to people, of telling them what they want to hear, of misrepresenting the truth. And where have we heard that before?

The control of stagecraft is measured. A singular moment is when water from high above the set surges down onto Coriolanus’s bloody body, spraying into the dark like sparks off steel. Hiddleston’s brutal characterisation of defiant self-determination does not come without an edge of charm and vulnerability which makes his final contrition credible.

For me there were some other niggles, principally with the contemporary costumes with their Roman twist – lots of tight, black jeans and boots but with sword belts and leather armour chest pieces.

Nonetheless, it was a powerful and impressive production.  As the famous Shakespearean scholar, AC Bradley observed that ‘Coriolanus’ is ‘scarcely popular’ and ‘seldom acted’. The more’s the pity and the true tragedy therein.