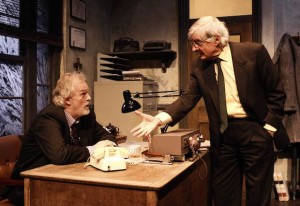 At the Yvonne Arnaud Theatre

I have fond memories of the 1982 Oscar nominated Sidney Lumet film version of David Mamet’s play, ‘The Verdict’ with my childhood throb, Paul Newman in the lead role of the role of the Frank Galvin. In light of this, the Middle Ground Theatre Company set itself a tough act to follow so I make no apolodgies for this lack-lustre review.

Even before the play starts, the scene is being set with Galvin (Clive Mantle), lying on the stage floor and waking up from a boozy night as the audience fill their seats. Galvin is a Boston lawyer who has had his problems over the years – a lost job, a messy divorce, a disbarment hearing, all of them traceable in one way or another to his alcoholism.

Galvin bravely takes on a malpractice suit against a Catholic hospital in Boston where a young woman was carelessly turned into a vegetable because of a medical oversight. Nuala Walsh is the mother who is looking for reparation for her bereft daughter and grandchildren. It is the ethics of the questionable medical malpractice by the hospital hung over the heads of all involved that creates the emotional weight to the performances as the audience followed the twists and turns of the story began to unravel. Sadly, the plot grinds along and at times accents slip.

From a state of inebriated depression to the rather unlikely sexual liaison with a young waitress (Cassie Bancroft) and on to his commanding presence in court, Clive Mantle nails facets of Galvin’s character.  Alongside is Jack Shepherd, as Galvin’s mentor, Moe Katz,  adding to the moral crusade for the truth. END_OF_DOCUMENT_TOKEN_TO_BE_REPLACED 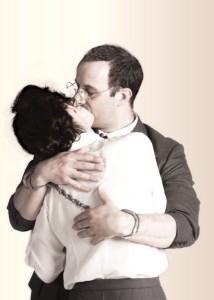 END_OF_DOCUMENT_TOKEN_TO_BE_REPLACED

‘La Traviata’  by Guiseppe Verdi at the Yvonne Arnaud Theatre

‘One day I’m going to make the world do her (La Traviata) honour. But not a Naples where your priests would be terrified of seeing on stage the sort of things they do themselves at night on the quiet.’  Giuseppe Verdi

To understand the full impact of Verdi’s words, we can appreciate initially that the literal translation of the title of the opera is ‘the woman led astray’. There are two sources of inspiration here: one is from Verdi’s relationship with his own wife (formerly an unmarried mother and opera singer);the other is that the role of Violetta was originally based on the real-life courtesan Marie Duplessis, who, as Marguerite Gautier, was the subject of Alexandre Dumas’novel and play, La Dame aux Camélias. The significance of the name ‘Camille’ and the flower itself, relates to the white camellia which the original Marguerite Gautier would wear to show her availability and also to the red camellia worn on those days when she was unavailable. Each of these reinterpretations of La traviata figuratively adds to the sense of Violetta as a ‘fallen woman’.

Now all this would predicate an emotionally calibrated evening. Certainly, the original title, ‘Amore e morte’ suggests this, even more since it had to be changed and the time set back to the 1700s rather than the 1900s. Verdi strongly objected, but the patriarchal/Christian censors did not want the lascivious goings-on in the story to be seen as a reflection of contemporary life. That a courtesan with questionable morals might be a likeable operatic heroine was a radical notion for its time. END_OF_DOCUMENT_TOKEN_TO_BE_REPLACED