The Convert  by Danai Gurira at The Young Vic Theatre 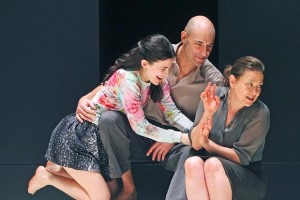 Alfieri: ‘I saw it was only a passion that had moved into his body, like a stranger.’
Marco: ‘In my country [Eddie] would be dead now.’

The play’s title is the perspective of most self-styled and indifferent New Yorkers, for whom the Italian immigrant community in the 1950s slum of Red Hook is merely a view from the Brooklyn Bridge. The tragedy of the protagonist  plays out: Eddie Carbone (Mark Strong) – a respected Brooklyn longshoreman with a questionable love for his niece Catherine (Phoebe Fox. Here ‘the gullet of New York is swallowing the tonnage of the world.’ Our guide /Chorus is the philosophical lawyer Alfieri (beautifully played by Michael Gould ) sets a tone of tragic inevitability from the outset. Alfieri introduces Eddie: ‘This one’s name was Eddie Carbone,’ speaking about him in the past tense shows that his fate has already come to an end and gives an indication that Eddie will die at the end of the play, so the audience are left wondering not what will happen to him but how it will happen. The experimental Belgian director, Ivo van Hove describes the play as ‘witnessing a car accident that you see a hundred metres before it happens.’

Many of the huge Italian community are supporting and hiding immigrants from their homeland who are fleeing the destruction and poverty of post-war Italy for a new life in America. Yet, when Eddie’s wife, Beatrice (Nicola Walker), volunteers to shelter her distant cousins, Marco (Emun Elliott) and Rodolfo (Luke Norris) who have just arrived secretly on the ships, Eddie’s control of his household is destroyed. The catalyst is Rudolfo who gains the affections of Catherine. The decision not to have Rodolpho and Marco speak with heavy Italian accents (they sound just as American as the other cast members) seems odd at first given that some of their lines obviously call for it. But it restores to the characters some extra dignity, levelling the playing field between the immigrants and the rest of Brooklyn. Tensions bubble and wry humour derives from Eddie’s fixation on Rodolpho’s sexuality, constantly telling Beatrice and Alfieri that Rodolpho ‘ain’t right,’ and in a (misguided) attempt to prove this, he forcefully kisses Rodolpho in front of Catherine.
From the outset, Eddie’s tactile relationship with his niece is perfectly pitched: once innocuous, now inappropriate. She’s an overgrown daddy’s girl, basically, jumping into his arms and wrapping her legs round his waist. Catherine’s short skirt sexualises our perceptions of a boundary which may have been crossed. Our suspicions are further fuelled when Beatrice further hints something is awry as she remonstrates that Eddie has neglected their sexual relationship. Nicola Walker conveys her repressed anger, jealousy and fear very convincingly. Yet, like many Miller tragic heroes, Eddie is a good-hearted man and proxy father with a fatal flaw.