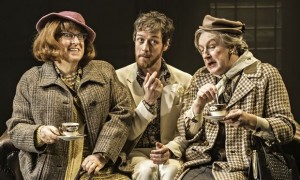 The Ruling Class by Peter Barnes at The Trafalgar Studios

‘Dr Herder: Then, of course, he never forgot being brutally rejected by his mother and father at the age of eleven. They sent him away, alone, into a primitive community of licensed bullies and pederasts.
Sir Charles: You mean he went to public school.’
This bawdy political farce about class, wealth and arisocratic power left me cold, despite the tour de force of James McAvoy playing the role of the 13th Earl of Gurney. The Earl is a paranoid schizophrenic aristocrat who believes he is god. It’s the kind of manic, hammed-up performance attributed to pantomime, punctuated with laboured punclines. The rest of the performances conform to my expectations of a school production. Even though, we left at the interval, Barnes play had nothing profound to say.
Yes, in 1968, ‘The Ruling Class’ must have been shocking in some ways and startlingly provocative in others. It is vitriolic about the Upper Classes in England, including the Church and the medical profession. To me the play seemed to be celebrating the very class it claims to chastise. Barnes’s play betrays its age. At worst it feels like a clownish period piece.
I left recalling Peter Cook’s observation in the sixties:
‘Britain is in danger of sinking, giggling into the sea’