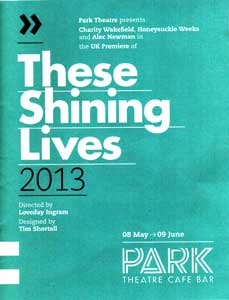 ‘These Shining Lives’ is an unusual play to launch the inaugural season of the new Park Theatre. The timing of this production comes in the wake of  the deaths of workers caught in the fire in the garment district of Dhaka Ashulia in November, 2012. It made public one of Bangladeshi’s best secrets: scandalous wages, deathly conditions, and the union-blocking legal code that help keep one of the world’s largest textile communities enslaved by savage corporate profiteering.

Similarly, This Shining Lives exposes the tragedy of exploited female office workers in the 1930s, who worked in a Chicago watch-maker’s sweatshop in the 1920s, delicately apply radium-soaked treatment that would make the dials glow in the dark. By licking the tip of the paintbrush, they made a fine point.  Gradually, the girls realise the process of ingestion is poisoning them despite being told otherwise.  Through the true story of one victim, Catherine Donohue and her colleagues, the play tracks her campaign to right this wrong, despite suffering bone cancer and necrosis of the jaw.

Charity Wakefield( as Kate)) successfully conveys the combined naivety in the excitement of the opportunities newly available to women in the world of the roaring twenties with tradtional expectations. The tension that arises from Catherine’s vow to make more money than her husband, instead of staying home with her young children, is part of the changing culture of the time. In contrast is the brash yet humane worker, Charlotte,  deftly portrayed by Honeysuckle Weeks. END_OF_DOCUMENT_TOKEN_TO_BE_REPLACED

A new intimate theatre near Finsbury Park tube station, north London.  The Park Theatre is housed in a completely re-built 19 century forge and stables, converted into offices in the late 1970s.

Transformed by artistic director Jez Bond and architect David Hughes, at a cost of £2.5m is an excellent addition to London’s fringe theatre scene. The attractive Tardis-like venue comprises two spaces of 210 and 80 seats with natural skylights, a late-night bar, coffee shop and a learning centre