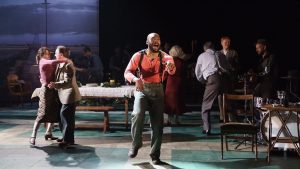 Girl from the North Country by Conor Mcpherson

At The Old Vic

Bob Dylan’s team approached Conor McPherson to see if he would be interested in basing a production around the songbook. At first he wasn’t keen then as always, an idea germinated. Dylan liked the concept and 40 of his albums were sent to McPherson saying that he could use any of the songs he liked. It is, says McPherson in a programme note, a ‘conversation between the songs and the story’ and what a conversation it is! Just spellbinding and haunting. It is an unusual musical which functions as the soul of the characters.

There is a Steinbeckian overtone to Conor Mcpherson’s play set in the Dustbowl at the height of the Great Depression. We find ourselves in a guesthouse in Duluth, Minnesota (Dylan’s hometown) in 1934. There’s a boxer on the run from trouble, a dodgy bible salesman, a widow waiting for her inheritance, a couple whose simple-minded son is more than they can handle, a kindly doctor, an elderly shoe-shop owner, and so on. Ciaran Hinds), and his wife Elizabeth, who is succumbing to dementia, though in Shirley Henderson’s hands, it’s the sexiest, cheekiest dementia you’ll ever come across. Henderson’s Elizabeth is very edgy.  She pulls at her shirt and whirls vaguely about the stage. It is only when Elizabeth sings that she is fully alive and in control. Petit as Henderson is, she commands our attention. When Elizabeth stands on a chair and booms with all her might. “Forever Young” we share her husband and her hopeless future. END_OF_DOCUMENT_TOKEN_TO_BE_REPLACED