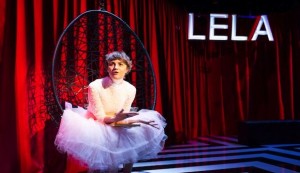 Lela & Co at the Jerwood Upstairs, The Royal Court

‘As for what came next, things unspoken and untold until now, it happened like this…’

Once upon a time fairy tales weren’t meant just for children and neither is Cordelia Lynn’s Royal Court debut play, ‘Lela & Co’. It’s like a subversive 90 minutes take on a traditional fairy story. We join Lela (Katie West) in her mind; a surreal world of neon lights, leather furniture, plush red curtains and black and white floor. Lela is dressed in a tutu, swings in her rattan chair, speaking in a thick Yorkshire accent.
At first, Lela’s monologue is lyrical and excitable as she introduces us to her childhood, when she lived with sisters, Em and Elle, together with her parents and grandmother. Lela warns us, she will be telling ‘the whole truth’ and as she does, her narrative darkens. When her sister Elle marries a man called Jay, the 15-year-old Lela is ‘married’ off on one of his ‘business associates’, and taken abroad to an unnamed country. Lela is abused by her husband, and then in her innocence, she is `passed on’ from hand to hand passed onto his friends as a sex slave, finally sold to anyone willing to pay. Her world contracts rapidly until it is the size of a dirty mattress. In one moment of the darkest humour, their marital relationship is presented as if it was a business: Lela & Co. Concurrent with this are ethnic tensions which result in armed struggle, bombings, shootings and invasions. War might be bad for business, but Lela’s husband has learnt to exploit the needs of soldiers, prostituting his wife and making money.

END_OF_DOCUMENT_TOKEN_TO_BE_REPLACED

Ironically,  the Royal Court Theatre’s press officer coined the phrase; ‘The Angry Young Men’ to promote John Osborne’s 1956 play Look Back in Anger. The label was later applied by British media to describe young British writers who were characterised by disillusionment with traditional English society. The word ‘angry’ is probably inappropriate as it was more a drive to raise awareness for what they perceived as the hypocrisy and aspirations for genuine change.

Similarly, Rachel De-lahay’s Routes is driven predominantly by anger – at the bureaucratic absurdity of the immigration system. Here, we home in on the human cost suffered by migrants coming to the UK from Africa.  The message is, thankfully, devoid of Daily Mail sensationalism or sentimentalism and, no doubt unable to engage support from any UKIP member of the audience. The politics are sound and profound.

Simon Godwin’s 70 minute production is slickly directed. Paul Wills’s angular stark set of two plain chairs as the only props prevents any distraction from the issues explored. Through two interlocking narratives, De-lahay juxtaposes the grim experience of those facing deportation from the UK with that of those trying to come here illegally. END_OF_DOCUMENT_TOKEN_TO_BE_REPLACED