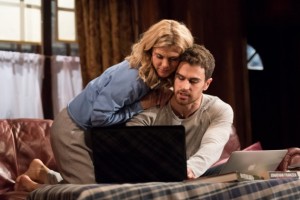 Sex With Strangers by Laura Eason

At the Hampstead Theatre

“How do I make myself hard enough to withstand all the bad but stay soft enough to still be the writer I want to be?”

Talented novelist; after her first book got badly marketed as chic-lit, she’s turned her back on success

Conditions: a blizzard outside.

Seasoning: The WiFi’s down

So strung together, Olivia (Emilia Fox), a literary professor in her late thirties, loves the smell of books and has one highly-regarded, little-read book.  In contrast, Ethan (Theo James  is a New York Times bestselling author thanks to an internet memoir based on his popular sex blog, ‘Sex with Strangers’ but craves literary legitimacy. Ethan is trapped by the image of the online persona he established as a young man, and his imprisonment feels like a warning to all online writers. Anonymity v Exposure.

So as the title suggests, there is no guessing as to what ensues when the two forces meet. Sex scenes follow most arguments feel tired, and, worse, tedious. END_OF_DOCUMENT_TOKEN_TO_BE_REPLACED 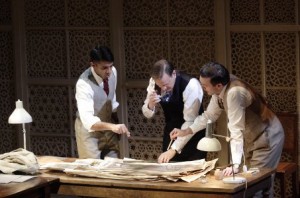 ‘Drawing the Line’ by Howard Brenton at the Hampstead Theatre

‘You British make this mistake, every time you colonise. You move into a huge area of the globe and call it a country, when it is not. You have done so all over Africa, in Arab countries, in Iraq.’

‘Drawing the Line’ was inspired by conversations Brenton had during a visit to India in 2009, and continues his theme of political upheaval seen in other plays he has written.

In 1947, finding empire morally insupportable, and short of post war funds, the ruthless Labour Prime Minister, Clement Attlee, decides to dismantle 200 years of rule of India in just five or six weeks. ‘Drawing the Line’ concentrates on the role played by one man, Cyril Radcliffe, played by Tom Beard. He travels to India, a country he has never visited and of which he has almost no knowledge, and with limited survey information, no expert support and no knowledge of cartography, aims to draw the border to divide the Indian sub-continent into two new Sovereign Dominions: India and Pakistan.

The scenario unravels like a Snakes and Ladders board game. Radcliffe is flung into a maelstrom of Indian politics, religion, culture, languages and opposing beliefs.  Ironically, it was the same incident that preoccupied WH Auden in 1966 which sums up the play’s chronology of events:

He got down to work, to the task of settling the fate
Of millions. The maps at his disposal were out of date
And the Census Returns almost certainly incorrect,
But there was no time to check them, no time to inspect
Contested areas. The weather was frightfully hot,
And a bout of dysentery kept him constantly on the trot,
But in seven weeks it was done, the frontiers decided,
A continent for better or worse divided.

The next day he sailed for England, where he could quickly forget
The case, as a good lawyer must. Return he would not,
Afraid, as he told his Club, that he might get shot. END_OF_DOCUMENT_TOKEN_TO_BE_REPLACED 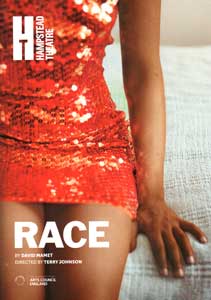 ‘Do you know what you can say to a black man on the subject of race?’

The added nuance that comes from these lines is that they are written by a white American writer who, literally, puts words in the mouths of black people.  Within this context, we do have to remember that American life and public discourse in the United States is very formal, albeit anodyne, and not just on the issue of race. Even on network television, you are not even allowed to use the word like ‘bloody’ and follow up questions are rare.  Race is just a taboo subject. As Mamet proclaims: Race, like sex, is a subject on which it is near impossible to tell the truth. We need also to be mindful that the play hit Broadway in 2009 when the country boasted a newly-elected African-American president – a period in its history that could dare to call itself post-racial. David Mamet’s Race slams on the brakes just in time before any sense of being self-congratulatory kicks in.

Over fifty years ago in ‘To Kill a Mockingbird,’ a black man accused of raping a white woman is necessarily found guilty by virtue of the colour of his skin.  Rules are reversed in ‘Race ‘ which begins as a crime mystery, when two high-profile lawyers, Henry Brown(Clarke Peters) who is black, and the white Jack Lawson (Jasper Britton) debate whether to defend a wealthy, white, racist client, Charles Strickland(Charles Daish) who is charged with the rape of a black woman.  Strickland admits that he was intimate with his accuser but claims it wasn’t rape, insisting that the sex was consensual. As one of the characters remarks, it is an almost impossible case for the defence to win. Underpinning this is a barbed jibe at  the exoneration of O.J. Simpson, despite forensic evidence linking him to a crime —an early indicator of the mid-nineties mind-set that informs the play. On the fringe emerges an attack from a young, black, female lawyer, Susan (Nina Tousaint-White)who highlights further how lawyers navigate the unspoken value systems of the jury. END_OF_DOCUMENT_TOKEN_TO_BE_REPLACED

A modern, small theatre ideally suited for plays in the round.