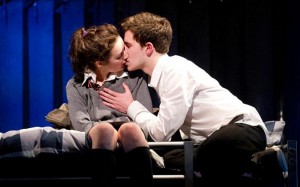 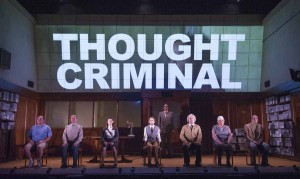 Our perceptions of reality are never stable, for the year 1984 initially runs concurrently with the book club discussions. Winston is seen struggling to write a diary ‘for the unborn’ – a ‘thought-crime’ punishable by death. As he writes the audience watches a close-up of the words on a big multi-media screen above the stage – we are inside Winston’s head. END_OF_DOCUMENT_TOKEN_TO_BE_REPLACED 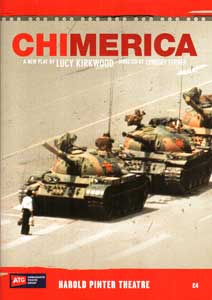 Chimerica begins with the iconic image of the Chinese protester/ the ‘Tank Man’, armed only with two shopping bags, stopping the might of an oppressive institution, symbolised by his stand before a phalanx of tanks.  This is captured by the photojournalist, Joe Schofield (Stephen Campbell Moore), an American then aged 19, who just happens to have the perfect view from his Beijing hotel window of the 1989 Tiananmen Square massacre. Years later, the fictional quest to find the Tank Man drives the deceptively simple narrative to achieve a transition from the opportune photo moment to the ramifications of Jo’s personal reckless pursuit. END_OF_DOCUMENT_TOKEN_TO_BE_REPLACED