Ok this will be short… Once the audience got over being crammed into a tiny workshop space, we were bombarded with mischief, bad behaviour and political incorrectness – a porn-loving Trekkie monster, some suicidal fluffy bears and just ‘a little bit of racism’.

Avenue Q is a hybrid of South Park and the Muppet Show in an all singing, all dancing musical “fur-fest”.  As its creators explain, ‘The metaphor is a children’s show to tell you about adult life’ and it is in this paradox that the attraction lies.’ I do have a sense of humour but this was not up my ‘Sesame Street’ of entertainment when confronted by a cast of fluffy, filthy and forgettable characters.

The narrative is simple: a story of Princeton, a bright-eyed college graduate who comes to New York City with big dreams and a tiny bank account. He soon discovers that the only neighbourhood in his price range is Avenue Q; still, the neighbours seem affable. There’s Brian the out-of-work comedian and his therapist fiancée Christmas Eve; Nicky, the good-hearted slacker and his roommate Rod—a Republican investment banker who seems to have some sort of secret; an Internet addict called Trekkie Monster; and a saccharin-cute kindergarten teaching assistant, named Kate.

The cast is made up of a mixture of humans. and puppets which are skilfully manipulated by City Academy’s actors, who are clearly visible,  deliver the dialogue and songs. The impressive thing is that so much prep work must have been done that often you watch the puppets rather than the real people operating them – even when one person is doing the voices of two different characters onstage at the same time, and someone else is moving another one – it all gets very complicated!

For a workshop, the cast is, in the main,exceptionally strong . Versatile Paul Moore’s, Rod certainly adds robustness to every scene. Justin Jeffrey’s’ Princeton achieves a credible puppyish appeal.  Helena Tang is Lucy The Slut – one of her most convincing roles to date. While Aika Nishimura provides many comical moments as Christmas Eve, she seems to struggle vocally  and remembering her lines at times. In contrast, hearing my daughter, Claire, cast in the New York tradition as the male Gary Coleman, sing ‘You can be as loud as the hell you want when you’re making love’ gave me much to think about!

All in all, it was a savvy, sassy production which I found in part endearing and for the most laborious as the central concept is stretched to almost breaking point –  I can think of more enjoyable coming of age stories than ‘Avenue Q’ ….. I enjoyed some of it – sort of, though I was distracted by a very young girl sitting on the floor nearby who was far too young for this dramatic impropriety. 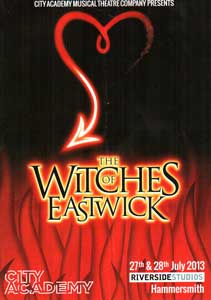 Helena Tang as Jane Smart excels in the scene during which Van Horne seduces her through her love of music, Claire Linney is a revelation as Alexandra Spofford, and Katharine Banbury (Sukie Rougemont) is a perfect example of frustration personified. All three have confident vocals and forcefully carry the show with the full support of an enthusiastic cast. END_OF_DOCUMENT_TOKEN_TO_BE_REPLACED