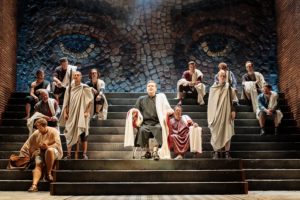 Robert Harris’s Cicero trilogy is a brilliant read: Imperium, the one that gives the stage version its title, (which was followed by Lustrum and Dictator) Following Cicero from the start of the legal case that made him, to the heights of being a Consul of Rome and then his steady fall from grace to his murder at the hands of Mark Antony, the books are fascinating. Told from the viewpoint of Cicero’s slave, loyal friend and amanuensis, Tiro, we watch the fall of the Republic from the very middle of the stage.

Each of the two parts of Imperium is broken into three roughly one hour plays, each covering a specific point in Cicero’s life. Part I of the RSC adaptation by Mike Poulton skims through the first half of the first book.   Here, we have the introduction to Cicero and his battling of Caesar’s land reforms, the Catiline Conspiracy and, finally, the rise of his pupil Clodius and his sister, the irrepressible Clodia ( Eloise Secker).  This section runs at a breakneck speed. The Verres trial that made Cicero’s name is covered in a break neck five minutes of an entertaining introduction of the main characters.  Joseph Kloska brilliant performance as Tiro briskly sets the scene, introduces us to his master, Robert McCabe as Cicero, honing his rhetorical skills as a lawyer, then the focus on his accession to the consulship, the highest post in the republic.   From the start, we are right into the Catiline Conspiracy, in which Cicero goes against the very thing that he vocally fought for in the Verres trial, the right of every Roman citizen to a trial.  McCabe is majestic throughout.  He throws all the swagger and ascerbic wit of Cicero into a powerful performance. Yet, Tiro is very much the ringmaster of the performance.  Tiro talks to us, breaking the fourth wall, to put us in the right mind for what is going on.  He introduces us to the new players of the game, Cicero’s wife Terentia (Siobhan Redmond), his daughter Tullia ( Jade Croot who I found irritating at times), Crassus (David Nicolle), a rising politician by the name of Gaius Julius Caesar (a very nuanced Peter de Jersey) and his pupils Clodius (Pierro Niel-Mee) and Rufus (Oliver Johnstone).

END_OF_DOCUMENT_TOKEN_TO_BE_REPLACED

The Ferryman by Jez Butterworth

“This isn’t history. This is now.’ Everyone living in Northern Ireland will become part of this story; this history, whether they want to or not.”

Uncle Pat: “Let’s not be teaching the wean that being English makes you wicked.”

It’s five years since I saw Jez Butterworth’s powerful Jerusalem. Similarly, The Ferryman is a layered and edgy production.

Nothing as it seems. Quinn,( William Houston) who we meet at home in one of the opening scenes, dancing wildly in the wee hours to the Rolling Stones with a woman we assume, is his wife or a lover. She’s not. Caitlin Carney (Catherine McCormack) is Quinn’s sister-in-law and the wife of the dead man. Laura Donnelly, the original Caitlin, was just a child when her uncle was taken away by the IRA, shot dead, and his body dumped in a bog:  the core that Butterworth retells here. There’s a clue in the title, as in mythology Charon ferries souls from this world to the next. McCormack plays a woman whose husband’s body is accidentally uncovered a decade after he was secretly buried, sparking a wave of violence and stirring up almost forgotten memories.  When I saw the play the role was played by Catherine McCormack. The play is set in the same year in rural Northern Ireland in 1981. A lot of old history resurfaces with him and so the family is entangled in Ireland’s bloodstained legacy of violence. END_OF_DOCUMENT_TOKEN_TO_BE_REPLACED