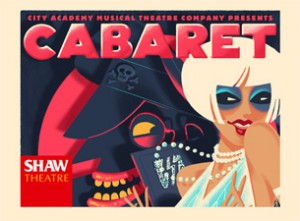 ‘Cabaret’ at The Shaw Theatre:music by John Kander and lyrics by Fred Ebb

Performed by City Academy’s Tuesday Company
19th July, 2014
‘Oh Fatherland, Fatherland, show us the sign.
Your children have waited to see!
The morning will come when the world is mine!
Tomorrow belongs to ME!’

I have a habit of beginning my reviews of musicals with the caveat that I don’t generally go out of my way to watch them, but ‘Cabaret’ is an exception, and of course, doing the parental duty of seeing my daughter and her City Academy musical theatre group perform. ‘Cabaret’ is the granddaddy of modern musicals for very good reason. In addition to being topical and intricate, it’s also does decadence with originality and spontaneity with disturbing elements. This is certainly a musical for those who do not like musicals.

The script for ‘Cabaret’ was inspired by Christopher Isherwood’s Berlin Stories based on his own personal memories and John Van Druten’s play, I Am a Camera. Berlin in 1931 was a liberal, some would say a decadent city; the First World War had been over for some time and the dark years of Nazi rule had yet to begin. The horror of the piece partly lies in the gulf between the characters’ comprehension of how the political shift will affect them and the reality which slowly encroaches. Throughout the musical, there’s not a single verbal reference to Hitler, and yet the presence of the growing Nazi movement all around these decadent misfits is ever present.

The scene is a seedy Kit Kat night-club in Berlin. The Master of Ceremonies welcomes the audience to the show and assures them that, whatever their troubles, they will forget them at the Cabaret. His songs provide wry commentary throughout the show. Initially, Niklas Haukohl’s Emcee seems awkward but he quickly slides between the comic and the menacing; a demonic shameless figure that seems to know everything, understand everything and deride everything. There is a well-performed three-in-a-bed scene which seems to be a signature expectation as the Emcee sings a stimulating ‘Two Ladies’ about the joys of a ménage à trois. Haukohl often lingers silently at the corner of the stage, watching the action unfold like history turning back and regarding itself.

Anne Heasell’s Sally Bowles is delivered with great assurance though I would like her to be more sluttishly sexy but yes, she is needy. Yet, she is true to Christopher Isherwood’s fictional depiction of a boarding-school girl on a jolly adventure. At the back of my mind was the Lisa Minnelli version which will always remain Cabaret’s footprint as it is easy to recall her dancing and singing with gay abandon.

Sam Sugarman is comfortable as Clifford Bradshaw in a role that can often seem underwritten, sharply capturing the character’s disgust at the rise of Nazism and his joy when he believes that he and Sally may have a child together. But you never feel that this mismatched couple are unexpectedly head-over-heels in love. Indeed the relationship between the old landlady, Fraulein Schneider, and her Jewish admirer Herr Schultz proves far more touching. Performances from Guisy Pappaladro and in particular,Bryan Polikoff were impressive. Isabelle Demaude- Yaui is also reliably good as a lady of the night whose business is booming.

Rebecca Wicking’s choreography of the Kit Kat ensemble is slick;the troupe achieve the best that I’ve ever seen. Kander and Ebb’s glorious score almost eliminates the thought of the impending horror, unnoticed by the members of the Kit Kat Klub. Familiar numbers, such as ‘Don’t Tell Mama’, and ‘Wilkommen’ and ‘Life is a Cabaret’ are belted out.

Towards the end, we gain a real sense of the hedonism coming to an abrupt end. The parallel with Hitler and the German population becomes unmistakable. The musical number, ‘Tomorrow Belongs to me’ is a chilling illustration of the appeal this new Nazi hope held for impoverished suffering Germans. The Master Of Ceremonies’ goose-steps on stage and his evil nodding grin reminds us, in retrospect, what it really led to. It becomes increasingly sinister as he manipulates the Kit Kat ensemble as if they were puppets on strings, dancing to his toxic tune. After the song, Cliff turns to Max, the club’s owner, and asks, ‘Still think you can control them?’ Tomorrow belongs to me’ must be one of the most disturbingly beautiful songs in musical repertoire. If we re-read Goethe’s FAUST, one of the points of that play is the attractiveness of evil-attractive in that evil attracts.

Cabaret is one of the few musicals I care to watch: dark, clever, complex, but un-deniably catchy, and here, professionally directed by Pippa O’Brien.