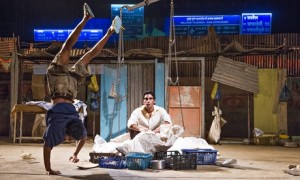 ‘Behind the Beautiful Forevers’ at The National Theatre

‘Everything around us is roses,
And we’re the shit in between’

In ‘Behind the Beautiful Forevers’, the lives of the poor are disposable. This is India, a country where the per capita annual income is only about £800; 70% live in slums, and have limited access to electricity, clean water, food, and educational opportunities. Slum children work as rag pickers, sewage cleaners and other unhealthy and dangerous jobs all around Mumbai, earning a few rupees a day in order to stave off their families’ hunger: the need is beyond understanding.
My only modern media image of slums in India is through films such as’ Slumdog Millionaire’ and ‘The Best Exotic Marigold Hotel’, but ‘Behind the Beautiful Forevers’ reminds me more of novels such as ‘A Fine Balance’ or  ‘White Tiger’. The  energetic script is an adaptation by David Hare of the Pulitzer prizewinning , Jennifer Boo ‘s non-fictional account of more than three years spent investigating and documenting life in the settlement of Annawadi by the main runway at Mumbai airport.
So, we have the setting: a city of contrasts, where immense wealth and extreme poverty are seldom apart.

Strangely though, optimism lies with the nearby airport; a source of some options for success – in waste and recyclable scavenging, in metal thievery, and, for a lucky few, regular service jobs in the hotels. A wall plastered with the words of an Italian tile company (beautiful forever … beautiful forever) provides the irony of recyclable trash. Schemes are fragile and global recession threatens the garbage trade.

This is the tale of the Husains, a migrant Muslim family who have risen to a level of success (in Annawadi terms) through the hard work of their son, Abdul, (Shane Zaza),who has built a successful recycling business. Abdul is the embodiment of a generation of young Indians striving to lift themselves out of poverty. Others, such as their next-door neighbour Fatima (the ‘One Leg’), resent the Husains’ relative prosperity. Although they live next door to each other and celebrate Muslim holidays together, tension between Fatima and the Husains continues to grow. One day while the Husains are improving their modest hut, Fatima starts a verbal argument with them that eventually grows to include all members of the family, as well as some bystanders. The argument ends with Fatima barricading herself inside her hut, dousing herself with cooking oil, and lighting a match. The Husains are blamed for inciting Fatima to commit suicide – a serious crime under India’s penal code. When Fatima eventually dies of an infection related to the treatment of her burns, three members of the Husain family are imprisoned; Abdul, his older sister, Kehkashan, and his father Karam. Over a period of several years, the accused Husains are beaten and starved in prison, before eventually being released on parole, and finally brought to trial. Kehkashan and Karam are acquitted after a trial that often reads like a comedy of errors. At the end of the book, Abdul’s case is in a state of limbo. During this period, with the main breadwinner unable to work steadily, the family recycling business takes a serious hit, and the Husains find themselves scrambling just to provide food.

Throughout, the Husain family finds itself enmeshed in a complex, corrupt legal system, where basic justice will cost every penny of their savings. When we think of corruption, the examples tend to be drawn from big business or top levels of government. The kind of corruption shown here is often described as ‘petty’ but it is the economic uncertainty that affects family and community relationships. The word ‘corruption’ has only negative connotations in Western nations. But in India, graft and fraud are among the few ‘genuine opportunities’ open to slum dwellers who hope to rise above poverty.
Corruption leads to underdevelopment which may explain why Sunil decides to remain a scavenger instead of a thief. Those like Ashi and the local police are victims of the corruption made by the higher authorities. They are victims of a cyclic dysfunctional system which brought them to be like those who victimised them, and they, in turn, felt they have power to those who they think are beneath them. This is a society where corruption runs rampant. Residents must make payments to police officers and even to each other, as a sort of Annawadi insurance policy: Pay today, and I will help you. Don’t pay, and your family will suffer.

No one represents the slum’s vitality better than Shane Zaza’s diligent Abdul — adept at sifting the rubbish that accumulates there and finding items he can sell.
For designer, Katrina Lindsay, the detritus of empty bottles and other trash are all that is needed to provide the setting. Waste is symbolic on a number of levels in this production. Industrial waste’s value ebbs and flows based on the global economy. Passers-by call Abdul ‘garbage,’ not garbage trader, and Sunil says he ‘feels like an insult,’ doing scavenging work. According to Boo’s definition, the slum dwellers understand that in a prospering city they are ‘embarrassments confined to small spaces, and their deaths would not matter at all.’ The occasional thunder of planes overhead, separate the affluent area near the airport from its surrounding slums.

Behind the Beautiful Forevers is a magnificent achievement, even if it’s not always emotionally or intellectually engaging. Perhaps Hare could have injected an edgy political comment about inequity.

For me the production hints at what the National Theatre may be like when Rufus Norris takes charge next year: bold, international, and not afraid of making audiences feel uncomfortable. Norris, the ‘director-of-the-moment’, directs in the shadow of five luxury hotels with uncomfortable subjects and unfamiliar casts.