My response to this new play by Tom Stoppard can probably best be summarised by my thoughts on exiting the theatre: “How do you stop audiences leaving a play at the interval?  Answer: Stage it as a single act”.

The “Hard Problem” of the title is that of understanding / explaining human consciousness. Does one subscribe to Cartesian Dualism – in which the brain and the mind are essentially different: the brain being material and the mind, and hence consciousness, being insubstantive in the material sense. Or does one subscribe to Materialism: the mind and brain are one and the same material entity and consciousness is some, as yet unexplained, consequence of the complexity of the brain’s functioning. Both positions have difficulties. How does the dualist explain how thoughts – from the immaterial mind – can be translated into actions, for example the movement of ones arm, in the physical world? Also, how can one explain the emergence of consciousness during the course of evolution: presumably the original simple organisms lacked consciousness but at some stage it must have evolved; though how a non-material mind could emerge is problematical without recourse to an external agent such as God. The materialist, on the other hand, has to explain how consciousness intuitively seems to be a quality that cannot be possessed by a mere automaton – be that a computer or a physical brain.

The promise of The Hard Problem was a play that explored these questions. Instead we were served a hotchpot of declamations – to call them arguments would be stretching the reality of the script – regarding consciousness, morality and altruism, biased scientific research, god and miracles with a dollop of hedge funds and market modelling thrown in. While any of these could have formed the basis for an intelligent, challenging play what we got never went into any depth on any of these questions. By analogy, for Radio 4 fans, it was more like listening to Question Time – with party political representatives proclaiming manifesto points – rather than The Moral Maze – an in depth interactive debate of an issue.

END_OF_DOCUMENT_TOKEN_TO_BE_REPLACED

At the Southwark Playhouse

Tony Kushner’s A Bright Room Called Day marked our first visit to the Southwark Playhouse – currently temporarily located in an office/warehouse building near Elephant & Castle but due to return to its roots at London Bridge station once redevelopment there is complete. The theatre immediately appealed to us: a friendly bar/restaurant and a small intimate theatre space that well suited the production.

The play is set in the early 1930s in Weimar Germany where we are effectively present in the main room of an apartment and observe the daily comings and goings of a group of friends centred around the principal character of Agnes. During the play the mood gradually changes from the optimism of the young participants and their support for the KPD (German communist party) to the violence of National Socialism and its persecution of Jews, political opponents (especially communists), homosexuals and radical artists; all of whom are represented among the cast of characters. END_OF_DOCUMENT_TOKEN_TO_BE_REPLACED

‘The Two Worlds of Charlie F’
by Owen Shears
23rd May,  G-Live, Guildford

The Two Worlds of Charlie F was first performed at the Theatre Royal Haymarket in January 2012 by a group of 12 wounded, injured and sick (WIS) service personnel and veterans of the Armed Forces and 5 professional actors. It is based upon the experience of service men and women severely injured while serving primarily in Afghanistan. Through a series of acts it covers their transition through recruitment, operational experience, injury and then treatment and rehabilitation.

The problem with reviewing the play is that it is difficult to separate ones response to the stories of the individuals and their undoubted courage in facing the trauma of severe injury and disability from ones critical judgement of the piece as theatre. There is undoubtedly an initial shock from seeing limbless, wheelchair bound actors on stage that clearly sets the tone for the piece. However, having a friend with an artificial limb, we found this perhaps less shocking than many of the audience.

We attended a pre-show briefing by some of the cast and we found this, in many ways, more emotionally powerful than the play itself. Their honest descriptions of the positive benefits from acting out their stories balanced by the sheer physical and mental effort of doing this while, in some cases, still undergoing operations and the effects of large scale drug treatment was genuinely moving. Unfortunately we found the play itself less convincing than this short pre-show event. Perhaps the size of the G-Live venue contributed to a lack of intimacy. We also felt that the piece was more a revue rather than a well developed play and it unfortunately exposed the somewhat, understandable amateur nature of the personnel on stage. A different format that involved the participants simply telling their stories would, in our view, have been far more powerful a drama. This of course might not have secured the type of nation wide appeal that the current show is enjoying.

None of this takes away from the courage of the individuals involved who have our full admiration. It is simply that their stories are so poignant and their personal determination to overcome their difficulties so moving that they deserve a simpler, dare one say less theatrical expression. 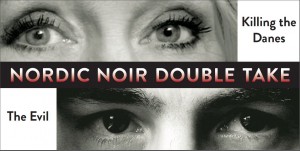 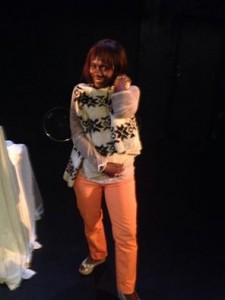 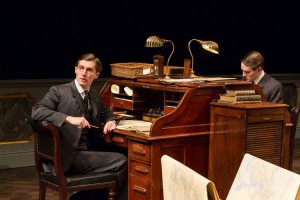 Write a 5,000 word essay on ‘The Versailles Treaty as an illustration of the choices facing the British after the Great War’. Your answer should pay particular attention to the disposition of the Saar coalfields and whether ceding them to France, as reparation or punishment of Germany, was political expediency at the cost of longer term stability in post-war Europe. If you can link this theme to the social changes, or lack thereof, occurring in upper-middle class English households and to women’s suffrage, bohemianism, shell-shock, capitalism and Bolshevism, Empire and also the relationship between the civil service and politicians then additional marks may be awarded.  Introducing the subject of homosexuality  into your answer may also improve your grade.

This, well the first part anyway, could be one of the essays in the final year of my History degree. But rather it is the starting point for Peter Gill’s three-hour long play that has just finished its run at the Donmar Warehouse. I was first attracted to the play by its subject matter related to the Versailles Treaty but it turned out to be an enjoyable theatrical experience. Gill succeeds in treating his audience as intelligent and knowledgeable rather than spoon-feeding us the historical background and without the need to sign-post the points he is making. The majority of theatre critics liked the play although some commentators have been less generous, obviously finding three hours of largely intellectual discussion too much for them.