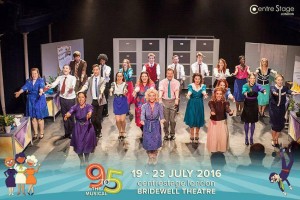 9 to 5: The Musical, music and lyrics by Dolly Parton based on the book by Patricia Resnick

Performed by Centre Stage at The Bridewell Theatre

‘Tumble out of bed and stumble to the kitchen, pour myself a cup of ambition and yawn and stretch and try to come to life.’

‘9 to 5:The Musical’ is the hilarious musical comedy based on the hit 1980s film that centres on three office workers who turn the tables on their sexist boss. Whilst Dolly Parton isn’t in the show in person, her presence is clearly felt throughout the show, and certainly, she has a knack for good old-fashioned country story-telling, even if the premise is implausible.

While the entire ensemble is exceptional, a number of performances stand out. One of the strongest performances comes from Luke Leahy, who succeeds in the unenviable task of playing the villain of the show with bigoted brilliance, whilst virtually stealing every scene he is in. ‘You are nothing but a typewriter with tits’ he tells Doralee, which makes his comeuppance all the more sweet.

Claire Linney shines as the downtrodden, Violet, long-overdue a promotion and leader of the trio, who hold their misogynist manager hostage. Wry and ambitious,  Linney’s Violet holds the show together and enjoys a touchingly low-key romance with a colleague.  Her solo number, ‘One of the Boys’ is feisty; definitely something every woman in the audience wanted to get up and sing.

Any actress, taking on the part of the peroxide blonde, Doralee is going to have to please the Dolly fans and Camilla Burnside is suitably bouncy, though less busty.  She certainly gives her songs, particularly ‘Backwoods Barbie’ enough of the Parton-twang to guarantee that she sure will make y’all mighty happy!

Gemma Zifras hits all the right notes as the Judy. In the second half, she captivates the audience  with ‘Get Out and Stay Out’ as she hits high note after high note, while  showing us Judy’s epic transformation from an insecure wife to a confident self-sufficient woman.

Administrative assistant, Roz (Alexis Rose) who is infatuated with boss Hart provides some of the best comical moments of the evening as she communes with her inner red hot mama. Tears fill our eyes with her big moment: ‘Heart to Hart’, a show stopper in every sense of the word.

Ed Currie as Joe, who has a crush on Violet, also makes his mark, with his moment centre stage coming towards the end of Act 2. ‘Let Love Grow’ becomes the love song of the evening when Joe begins to convince Violet that , despite the age gap, he’s worth taking a chance on. Sadly, the book /script don’t allow more development of his character.

Another worthy mention is Anna Bosanko as Margaret, who keeps champagne in a drawer and spends much of the time with her head on her desk. Her miraculous recovery after a stint in rehab is one of the many deft touches which make the production so enjoyable.

Most is made of a large supporting Centre Stage cast, with cleverly choreographed dance numbers by Paul Brookland Williams and the scene changes are almost seamless. The sheer magnitude of the show is at times jaw dropping as the stage, crammed with ingenious props and a host of swift changing dancers, deliver some cutting humour and a barrage of memorable songs. All is brought together unseen by a skilful band. The title song, serves as a lynchpin for a foot-stomping opening and finale.

Undoubtedly, Chris Adams’s superb direction has a definite buzz about it, gripping the audience from start to finish, leaving you wanting more. It is such a ‘feel-good’ evening with an outstanding cast who richly deserve their standing ovation.

So, clock into 9-5 but just don’t go taking any ideas from the stage back to the office with you.