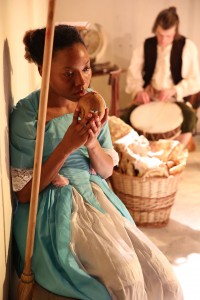 ‘Did you know that negroes have smaller brains than animals’

To see Matilda Ibini’s new play,‘Muscovado’ on first day of spring at Theatre 503 was such a good choice. It is a bitter sweet interconnected story of life on the Fairbranch sugar plantation in Barbados at the start of the 19th Century.  As Jane Austen did in ‘Mansfield Park’, the play serves to remind us of British involvement in the trans-Atlantic slave trade.
With the slave-owners’ way of life under threat from abolitionists in the old country and the possibility of rebellion closer to home, various tensions abound throughout: that between slaves and owner, the unseen Captain, owner of the plantation, and everyone’s tormenter; the latter’s role as husband and his trapped wife, Miss Kitty (Clemmie Reynolds); and Parson Lucy (Adam Morris), is unsettlingly convincing as an abhorrent, self-righteous pantomime villain who exploits his clerical position for power and greed. Even though the characters slip at times into caricatures of the period, there is an emotional reality which remains credible throughout.

Childless, Miss Kitty shows the irony of being a Mistress who is in some ways as much of a commodity, as much of a victim. She is an ambiguous character – at one moment a kindly guardian to the slaves, at the next a cruel mistress – and Clemmie Reynolds  struggles  at times in transition, not helped by some stilted dialogue, . The theme of a human being worth so much more than a commodity is constantly re-worked. Willa (Sophia Mackay) is the most cleverly nuanced character as she emerges from Miss Kitty’s plaything, harbouring an ambition to become a buccaneer to a clearer engagement with the plantation’s oppressive surrounding. Her dressing up for the family portrait is a chilling contrast of the appearance of respectability and lurid events without.
Asa (Alexander Kiffin) is the most intimate and longest serving member of the house-staff. His quiet demeanour develops with the relationship with the all-knowing, proud Elsie(Damilola K Fashola). Asa falls victim to his Mistress’s misplaced sense of power as she suggests that Asa facilitate a production line of ‘fresh’ slaves.
The play works superbly in a small location like Theatre 503. Sophia Simensky’s claustrophobic set evokes the play’s steamy and at times, sexually charged West Indian setting. From the start, the six strong ensemble maintain powerful choral singing which acts a rhythmic thread to tie scene changes and to vary the play’s tempo.
………………………………………………………………………………………………………………………
Muscovado was commissioned by BurntOut Theatre following the discovery of archives relating to Artistic Director Clemmie Reynolds’ family, who lived in Barbados in 1800s.
Nigerian born, Matilda Ibini who trained on Royal Court’s Writers Programme, is Soho Theatre’s Writer-in-Residence and the youngest winner of BBCWritersroom10 Award.