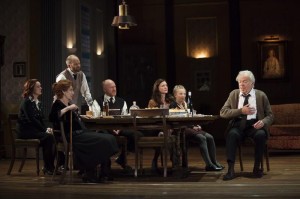 ‘My great-grandmother was a barely literate working-class woman who had no voice in society to express whatever thoughts and desires she had. So I’m writing about what happened to female voices over a century’. Tena Stivicic

‘3 Winters’ continues the international vein of the National Theatre ended 2014. As the title intimates,Croatian writer Tena Stivicic’s ambitious new play spans 1945, 1990 and 2011 in Zagreb with the interplay of seminal events for the Kos family: a homecoming, a funeral and a wedding. All of which made me wish I had done some background reading of Croatian history.

The drama is a slow burn of a Chekhovian nature. An opening scene in 1945 provides the narrative springboard. The year is the birth of Communist Yugoslavia Rose King (Jo Herbert), her husband Alexander (Alex Price) and baby, Masha, together with her mother Monika (Josie Walker) are assigned by Tito’s new government a portion of the prosperous townhouse in which Rose’s mother had been a servant. 1990 reveals the first serious fractures in the Yugoslav federation that would lead to war in the Balkans. Masha (Siobhan Finneran) and her younger sister Dunya are both married. Masha has two daughters of her own, Lucia (Charlotte Beaumont) and Alisa (Bebe Sanders). By 2011, Croatia is on the brink of joining the EU, the family assemble for the wedding of Lucia (Sophie Rundle). Alisa learns that her absent, nouveau-riche brother-in-law has bought the once nationalised house. For the bride this is progress, for her sister it is capitalist greed as he is willing to purchase the house at the expense of other tenants who are forcibly evicted.
Performances are strong, with women driving the political, social and personal narrative. Among the most powerful elements are the interactions between the two sets of sisters, Siobhan Finneran’s Masha and Dunya(fiercely performed by Lucy Black) , against Rundle’s steely Lucia and liberal, unconventional, PhD-studying sister, Alisa(Jodie McNee), the critical outsider whose studies keep her mainly in England and away from the family home. Štivičić can be uncompromisingly raw when occasion demands: elsewhere, her warm instinct for humour shines. Susan Engel (Karolina, in 1990) delivers much appreciated comic relief with her dry and dark wit.
Tim Hatley’s stark single house has ingenious sliding screen walls which change with the times. Its moral fibre is political as it is emotional, with decisions about its residency. The ever present portrait of Karolina, the daughter of the original aristocratic household adds continuity throughout the time periods. The house stands, of course, for Croatia itself as it maps the major political forces and ideological shifts that have shaped modern Europe. Jon Driscoll’s monochrome news reel clips elucidates the horrors of Croatia’s turbulent, bloody history.
Howard Davies’s production is a stark reminder of Mikhail Bulgakov’s ‘White Guard’ with its shifting political and domestic alliances and changing factions. All events are disorientating. Davies captures the enduring political tensions and struggles by The climactic twist is predictable; nonetheless, this is an impressive pared down tale of family and nation. Thankfully, this is the first production I have enjoyed in the Lyttlleton Theatre for a while.
Note from the author:
‘A hundred years ago my great-grandmother was a maid in a posh house,’ says the Croatian playwright. ‘She was illiterate, she got pregnant out of wedlock, she was ostracised from her rural community and she carried that stigma all her life. She didn’t have the voice to express her frustration or understand her position. But she had the instinct to send her daughter to school . . . and then her children finished college. And now I not only have a voice, but I’m using it – in more than one language.’